Book Club: Are You There God, It’s Me Margaret by Judy Blume 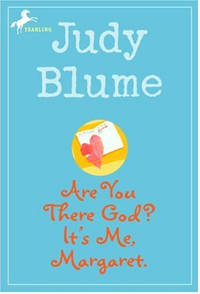 When twelve year old Margaret Simon moves from NYC to suburban New Jersey just in time for the start of sixth grade, she’s in for a long year of drama. Not only is she facing the typical puberty issues (boys, periods, bras and school dances), she’s in a brand new school. And to top it off, Margaret has no religion. With a Christian mother and a Jewish father, Margaret doesn’t fit in at either Sunday school or Hebrew school. What’s a girl to do?

Judy Blume’s novel about the struggles and angst of adolescence has remained popular with all girls, young and old, over the years. So what makes it such a classic? Let’s discuss!

Which awkward social scenario in this book do you relate to the most?
The scene that I can relate to best was when Margaret has to attend the sixth grade square dancing party. She really wants to dance with Philip Leroy, but she’s also terrified of embarrassing herself. I remember how nervous I was when I first had to dance with boys as part of the dreaded dance unit in gym class. Sweaty palms, bad breath, awkward arm placement- you name it, I was worried about it. Seriously, why don’t gym teachers spare us the torture?

Do you and your friends have secret clubs like the PTS (Pre Teen Sensations)?
The closest I ever came to being in a secret club was Girl Scouts. My friends and I never told anyone we were in Girl Scouts in middle school because we were too embarrassed. But we loved it because it helped us stick together throughout all of those awkward adolescent moments, just like Margaret and her friends Nancy, Janie and Gretchen were able to do. I think one of the reasons this book is such a classic is because it proves how important friendship is. A strong group of girlfriends is always a fabulous thing to have, no matter if you are 12, 25 or 60!

What do you think of Margaret’s experiments with religion? Would your parents let you choose your religion, or is it important that you keep the same religion as them?
I think Margaret is one brave chick for trying out all those different religions. If my parents hadn’t enrolled me in religious education classes when I was younger, I would have no idea about any of it! She’s obviously a smart and mature gal if she takes it upon herself to investigate and pick a religion. Major kudos to Margaret (and her parents) for being open-minded about all the different beliefs out there.

If Judy Blume had written a sequel, what do you think would be in store for Margaret in seventh grade? What kind of new challenges would she face?
My guess is that Margaret would finally have to tell Nancy about her crush on Moose. This might bring up trust issues between friends, and I think Margaret would really have to stand up for herself and be honest about what she wants. Maybe she’d finally become friends with Laura Danker, or realize that Philip Leroy is a jerk. Who knows, maybe she would even begin to like drippy Norman Fishbein! Whatever happens, I bet that Margaret will handle it with a kind and careful attitude.

What do you think? In your opinion, is Are You There God, It’s Me Margaret a classic? Let me know!