Jacob Have I Loved by Katherine Paterson 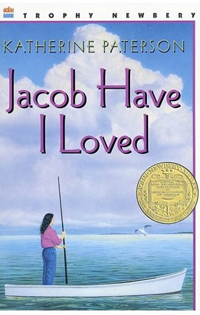 On the tiny island of Rass in the Chesapeake Bay in the early 1940’s, tomboy Louise Bradshaw spends her days happily crabbing with her longtime pal, McCall Purnell (Call). But at home, she’s always second fiddle to her gorgeous, talented and self-centered twin sister, Caroline, who gives Louise her much-hated nickname “Wheeze.” It doesn’t help that her crazy Grandmother often quotes the Bible passage “Jacob I have loved, but Esau I have hated,” a story about a boy in the Bible who is constantly overshadowed by his younger twin, just like how Louise is overshadowed by Caroline.

So what makes this book a classic? It’s a great example of the tumultuous relationship that can exist between siblings, especially sisters! Let’s talk about why…

What did you think of Caroline? Would you like to have her as a sister?
I think it was pretty crummy the way Caroline treats Louise. Granted, we are getting the story from Louise’s point of view, so maybe from Caroline’s perspective on their relationship is different. But it was frustrating that Caroline didn’t seem very sensitive to Louise at all. For example, when Louise gets embarrassed during school and runs away to hide, Caroline does go find her, but doesn’t sympathize or comfort her. I’d prefer a sister who’s always willing to give me a shoulder to cry on without making me feel dumb for being upset!

How do you relate to the relationship between Caroline and Louise? Does it remind you of your siblings?
I can definitely relate to the relationship between Caroline and Louise. My sister is only a year younger than me, so we fought a lot growing up. We both made serious efforts to carve out different personalities--she did soccer and track, I did ballet and tennis. Louise would have benefited a lot if she had more space from Caroline, but with the island so small, she can’t really escape Caroline’s shadow. They share a room, go to the same tiny school and hang out with each other all the time because there aren’t many other kids to pal around with.  Thank goodness my sister and I didn’t get stuck doing that!

Were you upset when the Captain gave Caroline the money for music school in Baltimore?  Or do you think she deserved it?
Everybody should have the chance to go to school, especially if they are talented and artistic. Plus, it was Caroline’s dream. Props to her for moving off the island and into a city so far away from home. That’s a pretty bold move for a young girl in the 1940s. But for Louise it was totally like someone just stabbed a knife through her heart, and I was disappointed that the Captain, Caroline and Louise’s parents didn’t seem to recognize this. I felt so bad for Louise at this point!

What’s up with the ending? Did you love it or hate it?
I thought the ending was just okay. I was thrilled for Louise that she finally left the island, went to college and made a whole new life for herself. And of course, when she delivers the twins at the end of the book, it brings everything full circle. But I was mad that Louise doesn’t even go to her own father’s funeral. And I wanted to know more about Joseph, her husband. It would have been great if there had been a whole chapter describing Louise’s wedding and the meeting between her parents and Joseph. Plus, there didn’t seem to be enough resolution between Louise and Caroline. I was waiting for Caroline to finally apologize for all those years of tormenting Louise. But hey, all’s well that ends well!


Katherine Paterson’s a pretty great author, huh? If you liked this read, we recommend two of her others: The Great Gilly Hopkins and Bridge to Terabithia. But for now, leave all your comments below!