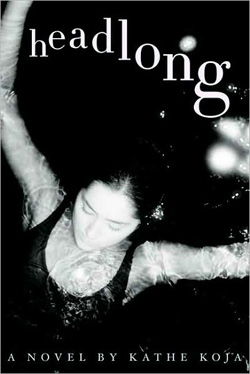 Have you ever struggled with fitting in? Not quite sure how to be “you”? It’s a common issue for teens, one that Kathe Koja tackles in Headlong. Lily Noble has gone to the Vaughn School since she was in pre-kindergarten.  Her mother attended as well, making her a second generation Vaughn Virgin, as the elite Vaughn girls are called.  Her friendships and societal views are challenged when she meets a fish out of water among the Vaughn students, Hazel.  With a punk-rock style and a street sense, Hazel hardly fulfills the stereotypical, preppy image that all the other pupils happily embrace.

Lily is immediately enchanted by the eccentric Hazel, and tries to befriend her, even as her own friends reject the new girl.  Breaking the rules whenever she can, Hazel smokes in the lounge of the dormitory and sneaks out, as she deems necessary.  Lily’s grades don’t falter while hanging around the rebellious teen; rather, they stay steady as Hazel speeds ahead in all the classes, causing resentment among her competitive peers.

As the year progresses and Lily morphs into a more independent being, she questions her stay at the Vaughn School and ponders a life different than the one with which she has been privileged.  She tries to convince her parents that she might be better served outside the walls of the boarding school, only to be met with resistance and harsh judgments regarding her growing relationship with Hazel.

Hazel represents the worst nightmare of a parent, someone who makes their children question authority and question themselves.  Most of the two dimensional characters in the story think of nothing but their own aspirations and their reputations among the elite.  As Lily breaks the mold and sees things in a different light, she can only be met by further discouragement when throughout the book there are hints that even Hazel is not what she seems.

The chronology of the book might throw you off a bit, as it jumps from June to September to June back to October and so on, revealing essential plot lines in the process.  Once you get used to the pattern of flashback and flash-forward, it’s easier to understand.

A coming of age tale, Headlong gives insight to a life most likely different from your own, but also very much alike as you empathize with the internal conflict of Lily Noble.  The new release is in stores now.