The dos and don'ts of flirtexting 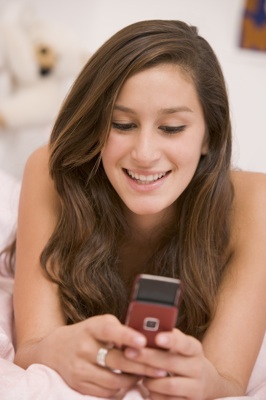 Flirtexting (flʉr tekst’iŋ) verb -  flirting via text.  For our techie generation, it’s like getting mini-love letters from your bf in real-time, or passing notes with your crush (with a little less chance of getting caught by the teach).  True, nothing beats the butterflies-in-your-stomach feeling of flirting with that fella in person.  But the feeling of seeing your crush’s name pop up on your cell screen (and the private happy dance that follows) is pretty spectacular too.  Plus, a little skillful SMS can overcome barriers that put a damper on romance, like by breaking the shell of a shy guy or bridging the distance between different schools.  We’ve got some do’s and don’ts for working your cellular charm.


Don’t use convo halters.  It’s not a make-or-break thing, but there are few potentially chatter-slowing pitfalls to avoid when trying to start a convo.  “Hey” or “What’s up?” are perfectly fine, but can be difficult to get a convo going, especially if you two don’t know each other well yet (what else is there to say but “hi” or “n2m”?).  Also, it’s generally best to avoid yes-or-no Qs, especially if you wanna get more than one-word replies.
Do use a clever convo starter.  Convo halters aside, there are some tricks you can try that will naturally get a text exchange going.  They don’t all apply in every sitch, but check out these examples and see if one works for you:

•    Blank text/accidental call:  This sly (and admittedly, kinda silly) move works if you’ve got your crush’s digits but are too bashful to text him for the first time.  There are two ways to go about it:  You can send a blank text, if your phone allows it.  He will likely text you back asking if you were trying to text him something.  Or, let your phone “accidentally” call and don’t say anything.  Then, follow it up with a text like “Sorry!  I think my phone backpack-dialed you!”  Either option gives you a convo opener without having to really initiate it.  Sure, it’s kinda goofy, but if it gives you the guts to text him, why not?  It may even lead to a funny story you can share with him later on.

•    Follow up:  A great way to initiate a text sesh is to follow up on something you guys talked about in person.  For example, if he told you he had a big test or game coming up, you could text him later and see how it went.  It’s a sweet gesture that shows you’ve been thinking about him and were paying attention last time you talked.  Or, if you guys were talking about a movie/song/video that he loves but you weren’t familiar with, check it out and text him what you thought of it.  Don’t feel obligated to gush over it if you didn’t dig it – having the opposite opinion of him can lead to some playful banter (“You thought that was the funniest vid ever? No way.  You have to check out ….”).

•    “I had a dream about you last night!”:  This one practically guarantees a response.  Of course, you shouldn’t use it if you didn’t really dream about him, and it’s best if you use it with a guy you have been flirting with for a while.  He will be so stoked to know that you think about him even in your sleep, and he’ll beg you to tell him what it was about!  You can go ahead and dish, or tell him it’s a secret that you’d only share in person!

Do be playful.  One of the great things about flirtexting is it’s easy to be bolder than you would in person.  So take advantage of that!  Use a few smileys or share a funny story or joke to show your sense of humor (you’ve got more time to plan out your responses than you would in person, making clever comments a cinch).  If the tête-à-têtes continue for a few days, you can even turn up the flirt factor,  if it feels right – a well-placed wink or “You looked cute today!” can do the trick.  A bonus flirtext move to try with your guy/bf?  Text him from across the room at a party or the other side of the table at lunch when you’re with a group.  It’ll surprise him, single him out (in a good way!), and provide for a fun, little secret moment between the two of you.

Don’t overdo it.  Flirtexting, like all great things in life, should be enjoyed in moderation.  While you may want to be in contact with your can’t-stop-thinking-about-him cutie 24/7, it can get to be too much.  Flirtexting with a new guy is to all about extending your in-person connection and getting excited to see each other again – which doesn’t work if you never stop.  Another word of caution:  don’t send multiple texts in a row – give him the chance to respond.  People have different texting styles (some are insta-responders, others not-so-much), so you don’t want to overwhelm him.  Also, there’s nothing wrong with being the one to start the text sesh (you are a 21st century girl, after all!), but let him start the convos now and again.  It will keep the flirting mutual, and give you a chance to gauge his interest.
Do turn text time into face time.  Just as in-person convos do, sometimes texting ones leave opportunities for making plans to actually hang out.  If you guys are texting about the big game on Friday, you can suggest meeting up and sitting together.  Or you can even include him in a group text, inviting him to bowling or the movies with you and your friends.  It’s laid-back and casual – just right for a text, and just right for flirting.
Don’t text anything you’ll regret.  Sure, you already know to stay away from “sexting” or sending inappropriate pics via text.  But it’s also best to steer clear of super-personal topics (even happy ones, like saying “I love you” for the first time) and jokes that could be misinterpreted.  First, you never know who will pick up his phone (you may be able to trust him, but you don’t know about his friends or li’l sis).  Even more importantly, without being able to see someone’s body language, it’s easy to get confused or have some miscommunication.  This can lead to problems, which are easily avoidable if you keep the text chatter light, and save the intimate deets for in-person.

POSTED IN guys, how to get a BF, how to flirt, crush crash course