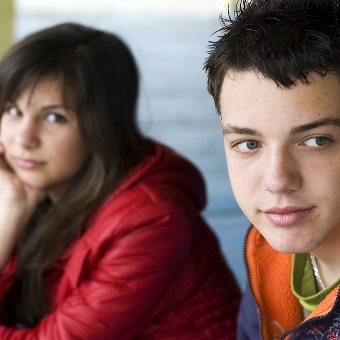 There’s this boy in my class that I really like, but he never notices me. Well, he does. He can’t understand me. He speaks Spanish!

Ay, caramba! Since you can't learn an entire language in a night's study sesh (kudos if you make it your New Year rezzie to learn the basics), you’ve gotta find easier ways to chit chat with him.

If he’s new to the country, he’ll probably start to pick up English soon, and then you’ll be able to have a conversation with him. The good news is, though, it’s not that hard to learn how to say, “Hi, my name is…” in Spanish. Just in case you don’t know, that’s “Hola, me llamo…” and it is pronounced “me yam-OH.” Since it's the holidays, be sure to wish him a “Feliz Navidad,” too!

Busting out some convo starters will show that you made an effort to break the language barrier to talk to him, so he’ll probably be impressed. And don’t be embarrassed if you flub! Chances are, he'll think it’s cute and can relate to trying to learn another language. Plus, you could ask him to teach you some Spanish vocab while you help him master English. Que bueno!

No matter what, do your best and amp up the body language. You two might not speak the same language, but a smile is universal, so flash your pearly whites to your crush and attempt a convo!
Love this post? You'll heart these, too!
» Make him yours by the time the ball drops
» To gift or not to gift – Bill and Dave have the answer!
» Hot holiday date ideas

POSTED IN guys, Dating, how to flirt, crush crash course, get his attention now