My ex is harassing me! 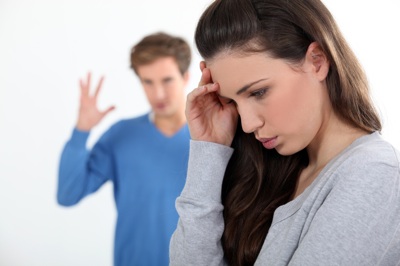 The guy I recently broke up with – let's call him “Bob” – is being a complete baby. I broke up with him because he told me he loved me, and I didn't feel the same way. Bob has started making up rumors about me, (e.g. I'm pregnant, I'm a back stabbing biotch, my friends all hate me) and he's being really rude to me. I've been ignoring him for over a month and a half now and he won't stop.
My friends think he's still in love with me, and I am definitely not in love with him. Recently it got so bad and he started pushing and shoving me. I've spoken to a trusted adult about this, and nothing has changed. I'm not sure what to do, and I'm starting to think the only way for this to stop is to get back together with him. HELP!!

Hey girl! First of all I just want to point out that it was very mature of you to recognize that the relationship was not going to work. Breaking up with your ex was the smart thing to do since the two of you both had different ideas of where the relationship was going. I also think it is very brave and strong of you to ignore the rumors and rude things he has been saying about you. It sounds like he is still has feelings for you, but his bitterness and frustration is his way of showing his hurt and pain.

With that said, this situation has definitely gotten way out of hand. No one, especially a boy, should be putting their hands on you. I think it time that you get the administration at your school involved with the situation. You should probably go to your guidance councilor or your principal. Fully explain to them the entire sitch, including the breakup, the rumors, and–most importantly–the pushing. If you have any classes with him, I would recommend going to your teacher after school and privately asking if you could have your seat changed so that you are seated as far away from him as possible.

Also, you should let your parents know what is going on. No one ever wants to here that someone has been physically harassing their child, so I am sure they will also follow up with your school about the incident. Your parents should probably reach out to his parents to make sure they know about their son’s aggression issues so that he can get the proper help that he needs in order to learn how to better handle his feelings.

I really hope everything works out and remember: Words will always be just words but no one should ever physically harm you. That is when you need to draw the line and reach out for help. Good luck!
Love this post? You’ll heart these, too!