What Guys Think: Can you be friends with an ex? 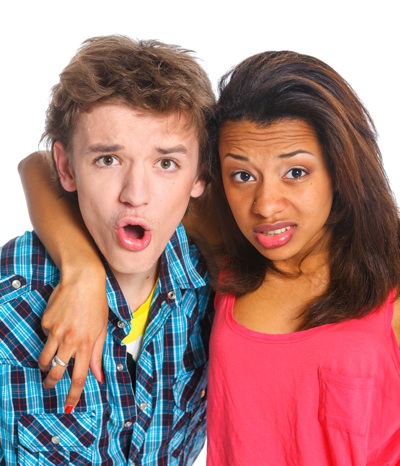 To us girls, it might seem like a guy can get over the relationship sooo much quicker after the breakup. We totally dis them when we’re done, and say sayonara to any chance of being friends after the awkward split. But have you ever wondered what the guy’s feelin’ like after you two go your separate ways? Check it out.

“When my last girlfriend and I broke up, it was a little awkward, but I definitely wanted to stay friends. Our friendship was so awesome before we broke up. I just wanted it back.” – Grant K., 16

Remember how you two started dating? It was probably because you began as friends. Try and remember that friendship when you breakup, and you might catch yourself wishing that you could have it back too. There’s nothing wrong with that!

“Usually I try and stay friends with a girl so that I don’t feel as bad about breaking up with her.” – Justin M., 18

Well, that’s just a cowardly way for a guy to break up with you. If you ever hear him say, “but we can still be friends…” tell him to cut it out and tell you what’s really going on. There’s obviously something that went wrong in the relationship, so tell him to just be honest and let you know what it is instead of trying to hide it with saying you can still be friends.

“I’m just not in love with my ex-girlfriend anymore, but I’ve definitely grown to love her as a person. I still couldn’t imagine not having her in my life.” – Scott S., 17

This can happen, a lot. You might be with a guy for a long time, and the lovey dovey feeling may fade away, but you still care about each other. This is a normal feeling, and staying friends in this situation usually always works.

“I couldn’t be friends with my ex. I’d always be worried about seeing her with other guys. It just wouldn’t work out.” – Zack W., 16

This is a sticky sitch, because if your guy broke up with you, he shouldn’t be jealous to see you with other guys. If that feeling is still there, maybe you two need to talk about your relationship a little more. When you two settle your differences, you should want each other to be happy with other people.

+ Dudes decoded: Bill and Dave got this

+ What he really thinks of your summer outfit