I want my ex back... but he asked out my friend. Help! 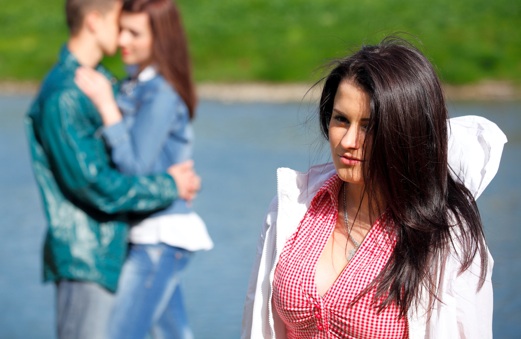 I broke up with my boyfriend a couple months ago, and now I want him back. I'm afraid he doesn't still like me because he asked some of my friends out. Help!!

His Answer: “He’s probably hurt and still bitter about that. If he's asked out a couple of your friends he's probably moved on," says Evan M., 17. "He had to move on because you broke up with him, and now that you're ready to get back together, he might not be anymore."

Decoded: By breaking up with him, he no longer saw you as an option and started hanging out with other girls. He couldn't just sit waiting for you, because he never expected you to come back. Asking your friends out shows that maybe he's gotten past the broken relationship. Even if there is a chance he still has feelings, don't expect him to.

Your Move: If ya really want to win him back, start talking to your ex more as a friend, getting a gauge on where he stands with you and other girls. If he’s friendly or flirty, there could be a chance. But be prepared for a no. Odds are, he might not wanna put up with the breakup/makeup cycle. If he’s still making moves on other girls, take a hint from him and find a new cutie to crush on.