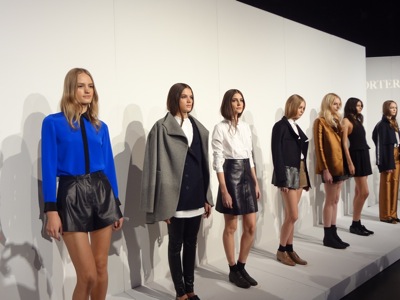 After spending seven days in the Big Apple, I now know why New York City is deemed the city that never sleeps—I was lucky if I managed a mere five hours each night, but come on, who would want to miss out on a Betsy Johnson after-party? Working behind the scenes during New York Fashion Week was an opportunity of a lifetime; while there was plenty of glitz and glamour, there were also some major life lessons to be learned.

Life Lesson No. 1: Kindness will take you a long way

When I moved a grateful guest from the back row to a swoon-worthy front row seat, she invited me out to lunch afterwards. The woman was so surprised by my act of kindness that she insisted on returning the favor. We talked for over an hour, and she even introduced me to her sister—the CEO of a modeling company!

Life Lesson No. 2: Don’t be afraid to wear a tutu

…Or any other item in your closet that could double as a Halloween costume. Fashionistas put their best foot forward (in sky-high heels, no less) during Fashion Week and fully embrace the idea that fashion is a form of self-expression. Rock the outfits that make you who you are. (And for the record, there was a guy sporting a tutu all week!)

I volunteered for Fashion Week last season, so this was my second time working the shows. Because I made a memorable impression by staying later than needed and going above my duties as a volunteer, I was promoted to a more authoritative position this season. The perks were totally worth the longer hours!

Life Lesson No. 4: Assertiveness is key

I’m completely embarrassed to admit it, but I cried before one of the shows. The head of security wrongly accused me of causing a mishap, so I tried explaining the situation to her. She was unwilling to hear my side of the story, though I knew I was simply doing my job. After realizing she had made a mistake, she apologized to me—but not until after I had already burst into tears!

Life Lesson No. 5: Don’t freak out if you spot a celeb

Okay, so it was pretty cool when the star of my favorite TV show was standing next to me in the elevator. As much as I wanted to ask Shay Mitchell for the scoop on Pretty Little Liars (when will we finally find out who A is?!), I realized that it would be overwhelming to have paparazzi and fans swarming you 24/7. Gushing to your BFFs is totally acceptable, though!
Photo via Jimmy Choos on the Treadmill

» 10 cute outfits to catch his eye

» What to pack for spring break

» Your best beauty buys under $5