What's going on with gluten? 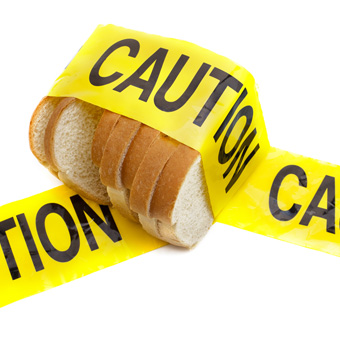 From headlines to grocery store shelves, gluten-free living is starting to snag some limelight. But what’s it all about, anyway?

The idea of going gluten free began several decades ago, when the autoimmune disorder called celiac disease just started to be diagnosed in large numbers. Current research suggests as many as 1 in 22 people have it, though the disease often goes undiagnosed.

People who suffer from celiac disease are unable to digest gluten, a protein found in wheat, rye and barley. Most suffer from painful gastrointestinal and neurological symptoms ranging from chronic diarrhea and constipation to migraine-like headaches and fatigue—but only when they consume gluten.

Going on a gluten-free diet is the only way for celiac patients to stay healthy. That means no bread, no cookies, no pasta, no pizza…at least not the way most know it. As you’ve probably seen in your local grocery store, companies are starting to wise up. As the market for gluten-free products increases, so too does the number of gluten-free products available. You can now buy tasty (though expensive) GF goodies, from bagels and baking mixes to pretzels and pizza dough.

Celiac disease is only part of the story, though. Some people test negative for the disease (through blood tests and biopsies) but still present the same gastrointestinal and neurological symptoms. Still others say that while eating a PB&J on whole wheat bread doesn’t make them sick, per say, they don’t feel quite as good eating gluten as they do when they don’t eat gluten. The solution? Adjusting their diets to avoid or eliminate gluten-containing foods, whether that means purchasing substitutes made with rice or other varieties of flour or finding alternatives, like eating a chicken salad for lunch instead of a chicken sandwich.

I’ve had tummy problems for a while, and I think I might have celiac disease. What should I do?

Make an appointment to see your doctor before making changes to your diet. If necessary, your primary care physician will be able to refer you to a good gastroenterologist who can help solve your tummy problems. Don’t worry! The pros will be able to help.

I’ve been diagnosed with celiac disease, but sometimes I cheat on my diet, even though it makes me feel bad. Is that OK?

I know it’s hard, but this is one diet that you need to stick to, if you have celiac disease. Not doing so can seriously hurt your bod, babe. Talk to your doc or a dietician if you have any Qs about what you can and can’t eat safely.

I don’t have celiac disease and I don’t think I’m gluten intolerant, but would it be healthier to just not eat gluten?

Not necessarily, and definitely not, if you just replace your normal whole wheat bread with gluten-free bread or other processed gluten-free foods. The healthiest diet is one that makes your body feel good. It should be packed with plenty of natural, lean proteins as well as fruits, veggies and whole grains. For the healthiest picks, try shopping on the perimeter of the store rather than all the inside aisles, which is where you’ll find most of the processed food.

Remember: When in doubt, always talk to your doctor. For more info on celiac disease, click here.

» Wanna get fit fast? Sign up now to get our FREE health & fitness newsletter every week!