In the News: Congress thinks pizza sauce is a veggie 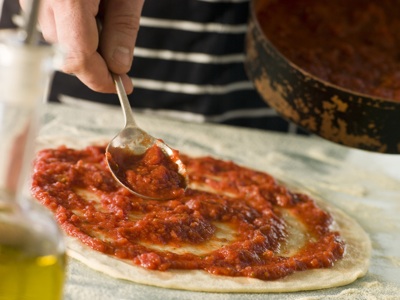 Where do you get your vegetable servings from? According to Congress, you get half a cup of veggies from the two tablespoons of tomato paste that goes on pizza. The U.S. Agricultural Department tried to change that earlier this year with a proposal for new school lunches, but Congress has blocked it from happening.

The nutritional value of your school lunches has been a hot topic lately. In efforts to decrease childhood obesity, the U.S. Agricultural Department proposed to lower the amount of sodium and potatoes and increase the whole grains in school lunches. Schools are supposed to follow certain guidelines now, but many still serve pizza and fries daily. The proposal wanted to cut this down to two times a week.

The proposal wasn’t approved because Congress thought the regulations were too strict, and that foods like tomato paste and starchy vegetables (including potatoes, corn and green beans) have some nutritional value that can’t be ignored. The amount of tomato paste on pizza, for example, has almost six times the amount of potassium and four times the amount of calcium in a half-cup of apples.

Do you think the amount of pizza and fries in school lunches is a problem? Would you be upset if the amount of sodium and potatoes were reduced in your lunch? After all, you’ve gotta eat something for lunch, so what would you prefer? Let us know what you think!
Love this post? You'll heart these, too!

POSTED IN body, eating, how to cut out junk food, health, nutrition, School, In the News