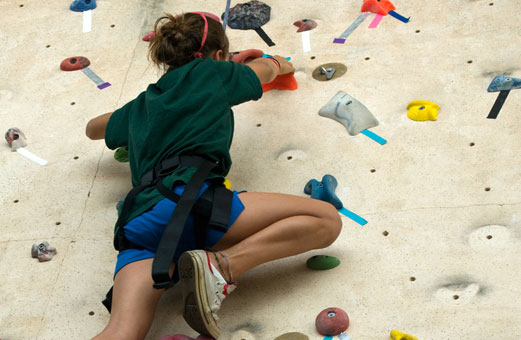 So you wanna get out and get active, but you’re tired of just running or hitting the gym? Check out these sports to spice up your routine, and maybe you’ll find one that really gets your heart goin’. You never know ‘til you try!

What? Just because it’s called “rock climbing,” doesn’t mean you have to scale the Grand Canyon. In fact, you don’t even need to go outside in the heat (although you’ll get nice and sweaty anyway). If you’ve ever seen a climbing wall with brightly-colored handholds in gym class or at a special event, that’s what we’re diggin’ for an exciting way to spend a summer afternoon.

Why? Rock climbing is a super way to work out your entire bod all at once. You’re obviously using your arms to pull yourself up, but you’ve gotta put in lots of leg muscle to push up, too. Your core will tone up over time, and you’ll discover muscles that you didn’t know you had. Even your brain gets a workout because you’ve gotta constantly search for the best path up each wall. The best part is that climbing provides an awesome cardio challenge and will help ya stock up on lean muscle.

How? There are a couple different ways you can climb at indoor gyms. First, you can belay, which is when you strap yourself into a harness that is attached to another person on the ground, who is called the “belayer.” That way, if you slip off the wall, the belayer stops letting out the rope so that you don’t fall to the ground. In order to belay, you have to go through a short how-to and safety session the first time you hit the climbing gym. If you wanna skip all the ropes and the instructional session, though, you can also try bouldering. Bouldering is when you only climb short walls with thick crash pads below. The trick is that you climb without a harness, so you’re totally relying on your bod to get up the wall.

Where? There are tons of indoor climbing gyms around the country, from California to Maine to Texas. Just use Google to find the one that’s closest to you. And remember that if you’re under 18 and plannin’ on leaving the ‘rents at home, you’ll need a signed release form to climb.

Fun Facts: People have been scrambling up mountains just because they could since the late 1700s. But even before that, they had to hike over mountains just to get from one place to another, considering they were a li’l short on planes, trains and cars back then. So nobody knows exactly who was the first rock climber, but now, the sport is becoming popular both indoors and outdoors as a way to take brains and bods to their limits.

Have you ever been rock climbing, babes? What’s it like?

POSTED IN sports, get outside