Feeling down? Read these 7 books to pick yourself up 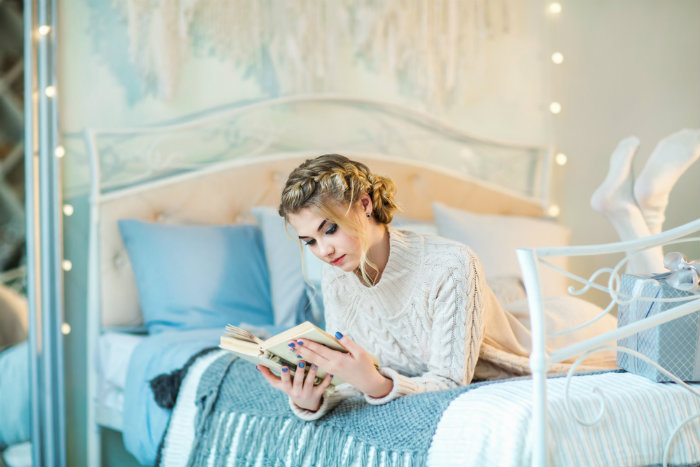 Struggling with anything from depression to low self-esteem to anxiety can be seriously isolating. Even when you try to open up to someone close to you, it can still sometimes feel like you’re alone in what you’re struggling with and that no one understands. Other times, you might not want to talk about your feelings, but it’s comforting to know someone who is going through or has gone through the same thing. Here is a list of books for you girls that will remind you that no matter what, you're not alone. (Please note that some of these on this list can be triggering, so take care when reading them).

It’s Kind of A Funny Story by Ned Vizzini

This novel depicts an extremely intelligent high school student named Craig who finds himself struggling with depression. Overwhelmed by all of the things in his life, he makes the decision to try and end it. However, before he can do that he checks himself into a mental health facility at a local hospital. With the youth ward closed, he is put in with the adults, where he meets two characters in particular that help him along with his journey. Stories like this one are so important because they show us that when you struggle, you are not alone and there are always people that want to help you. Despite the fact that there will be bumps in the road, your life is worth driving over them.

Samantha McCallister may look like one of the regular popular people at her school with sleek straightened hair and perfectly applied makeup. However, beneath the facade there is something else going on. Samantha has OCD, which means that she is often fighting off intrusive thoughts and worries that she can’t seem to shake. It is only when she meets a new friend, Caroline, who introduces her to a place called ‘Poet’s Corner’, that she finds a group of people she doesn’t feel so out of place with. Before I Die by Jenny Downham

In this novel we meet a young girl living with a terminal illness. With just months to live she finds herself going through rounds of tests, drugs with painful side effects and endless hospital visits. As a way to fight against this, Tessa creates a list of things she wants to do before she dies. Before I Die deals with divorce of parents, but also depression. In the wake of the loss of a girl he loves, a college student named Toru finds himself still struggling with the death of his best friend years before. He is also very devoted to Naoko, who is both beautiful and introspective, and as Naoko finds the pressures of life to be all too much, she begins to retreat. Not just away from Toru, but from the world itself. As Naoko retreats away from the world, Tori finds himself reaching out to it. Meet a fifteen-year-old girl growing up in the 60s, trying to navigate that ins-and-outs of being a teenager while keeping a secret from those around her. The secret? That her mom is suffering from a mental illness. No one in Laura’s family talks about these things, but after Laura suffers a breakdown she finds herself fearing that she has what her mother has. Everything I Never Told You by Celeste Ng

This book is about a Chinese-American family living in a small Ohio town in the 1970s. Lydia finds herself the favorite child of parents that are sure that she will accomplish her dreams in a way that they were not able to. However, when her body is found in a lake, the Lee family find themselves shaken to the very core. With everything they’ve ever known rocked, their structure is thrown into complete chaos. This book is about a family and it’s struggle to understand one another in the wake of a disaster that turns their life completely upside down. The Memory of Light by Francisco X. Stork

Vicki arrives at Lakeview Hospital after trying to kill herself, and here she meets a team of people that will go on to not only help her understand the pain she’s feeling, but to deal with it. Instead of focusing on what exactly led up to Vicki’s suicide attempt, they focus on her recovering from it. This novel is based partly on the author’s own experience with depression, which gives an honest and open understanding of just how difficult the subject can be.

Are you having suicidal thoughts? For immediate help, call 1-800-273-8255. The National Suicide Prevention hotline is open 24 hours a day, and also offers a lifeline chat you can access online.

What are your favorite books that deal with tough issues? Let us know in the comments!