Are you *too* obsessed with being healthy? Here's how one GL girl learned how to have better balance

*Warning: this post contains a discussion of eating disorders. If you feel that this topic is triggering to you, you may not want to continue reading* 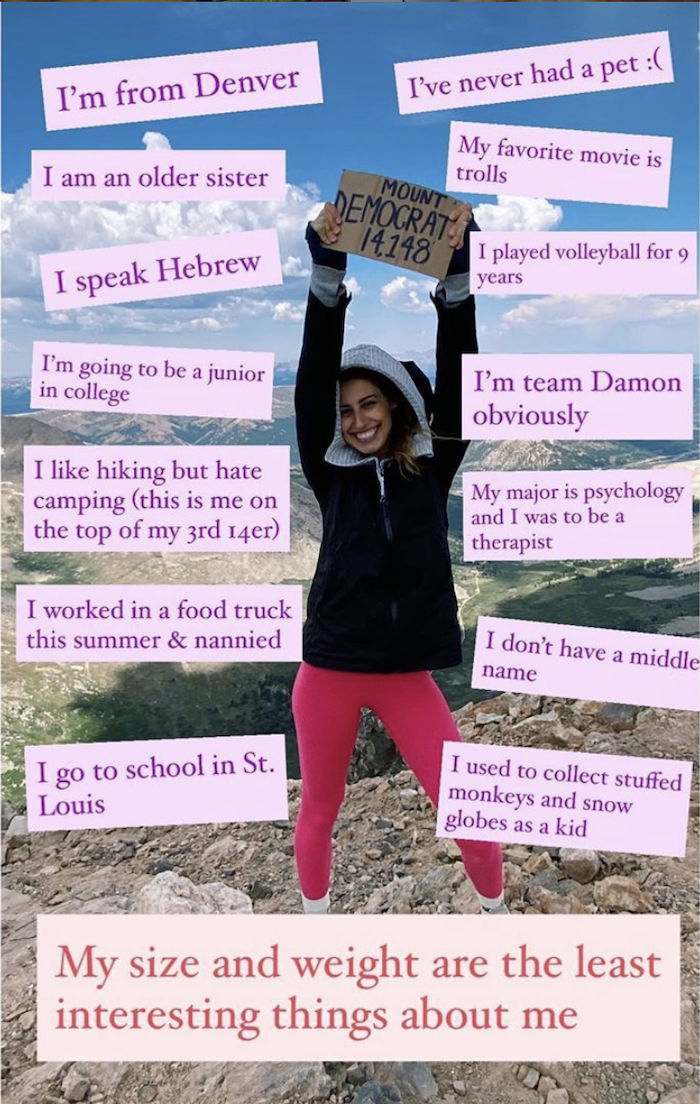 Upon first glance, Maya Borenstein is a girl who has *everything* together. She is pretty, smart, social and runs a food Instagram account (@papayasfood) that has grown to over 12,000 followers over the past two years. Maya, a 20-year-old college student and former Division III volleyball player, juggles her classes and other activities while posting aesthetic photos of her meals almost every day. While her expertly-decorated oatmeal bowls and veggie-filled dinners give her followers *major* healthy eating inspo, she recently began to use her following to raise awareness of her behind-the-scenes struggles to establish a healthy relationship with food.

What started as a "spam" account and an artistic outlet for Maya to share fun photos of her eats grew to be a big hit.  Maya realized how many people she can reach with the platform that she unexpectedly found herself with. This summer she took a brave step and came forward about her struggle with orthorexia in this heartfelt post:

Hiii guys! I’ve had something on my mind for a while and I wanted to share these these thoughts with you. Although I’m feeling very vulnerable sharing this on social media because so many people from my high school and college follow me, I think that if my words and experience can help even one person seek the help they need or positively adjust how they interact with someone then it’s worth it. I want to start by sharing my story so that anyone who is experiencing something similar knows they are not alone and can hopefully gain insight into possible next steps. I grew up in a very active and healthy family and played sports my whole life. Although that played a part in having the body that I did, it’s also important to note that genes play such a huge role in our bodies and this is why each person needs different amounts of fuel and exercise to feel their best. So, I have always been conventially skinny and had a “healthy” diet consisting of minimal “bad” foods just because of what we had in my house. Growing up people always commented on my weight and the fact that i “ate healthy” and it became ingrained into my perspective of myself. While these people had no idea that their words had such an impact and they probably made these comments as an attempt to be compliments, the constant dialect about my body and eating habits became so normal that I began to feel as though my body and food choices had to be part of my identity. Then as I got older and hit puberty, by body started to change, I gained weight, and was older so more of the decisions about food were going to be up to me rather than my parents. THIS IS NORMAL. WOMEN NEED TO GAIN WEIGHT AND ALL OF OUR BODIES CHANGE AS A PART OF PREPARING TO BEAR CHILDREN!! But because I had always had people comment on how my body looked I felt that I was doing something wrong when my body changed. This is when I started to become obsessed with healthy eating and maintaining a “healthy” lifestyle. I wanted my body to look the way people had always admired it, even though that wasn’t healthy for my age anymore.... 🌈Continued in the comments🌈

We spoke with Maya about her journey with disordered eating and how she came to develop a more relaxed relationship with food. Since sharing her own story, she has received an overwhelming number of messages from her classmates, friends, and even strangers who have gone through the same struggles as her. While health classes in middle and high school often share basic information on anorexia and bulimia, orthorexia is not discussed quite as widely (which leads to the risk of it going undiagnosed within people who do not know which warning signs to look for).

Orthorexia is defined by the National Eating Disorders Association as "an obsession with proper or ‘healthful’ eating" that eventually harms your own mental and physical well-being. The website lists common behaviors of people with orthorexia, such as cutting out multiple foods or food groups that are considered "bad," constantly checking nutrition labels on various foods, and body image issues. Maya noticed that after she was brave enough to publicly describe her experiences with these behaviors, many others followed in suit. It helped her realize that “It is so helpful to talk about these things with other friends because odds are, you know someone who has gone through something similar. Once I shared my story I was shocked at how many people who were very close to me had gone through the exact same thing as me and it was really nice to not feel alone in that.”

Maya's disordered eating behaviors began the summer before her freshman year of college, but she did not realize the negative side of her actions until very recently. Once she began to learn more about orthorexia and listen to the concerns of her family, she decided to seek help and has since made it a priority to find a better balance between eating healthy foods and treating herself every once in a while. She says that the biggest change to her behavior over the last several months is that “I give myself a lot of slack now which I didn’t do in the past. I let myself have those bad days and try to get out of them, but I know that I need to analyze my feelings."

Another thing that has helped Maya on the road to developing a more positive relationship with food? Ironically, it involves being more selective about the food-related social media content that she follows and shares herself. She started noticing how looking at the content of certain food accounts made her start comparing herself and her diet to theirs and caused her a lot of anxiety, so she unfollowed those accounts and started to be more thoughtful about what she shares with her audience.  “I never want my food page to harm followers the way that some food pages have harmed me," Maya says. "What I used to post is NOT all I ate in a day, but it often appeared that way! I have been trying to post more on my stories showing what I snack on throughout the day to help break that expectation that people can only eat 3 clean meals a day which just isn’t always realistic.”

Above anything else, Maya wants her followers and other Insta users to know that social media does not always tell the whole story and that you should never determine your own worth from what you see on others' highlight reels.

If you or someone you know is struggling with an eating disorder, visit https://www.nationaleatingdisorders.org/ or text CONNECT to 741741 to reach a crisis counselor for support.