What's it like to be a girl in wrestling? These amaze athletes tell all 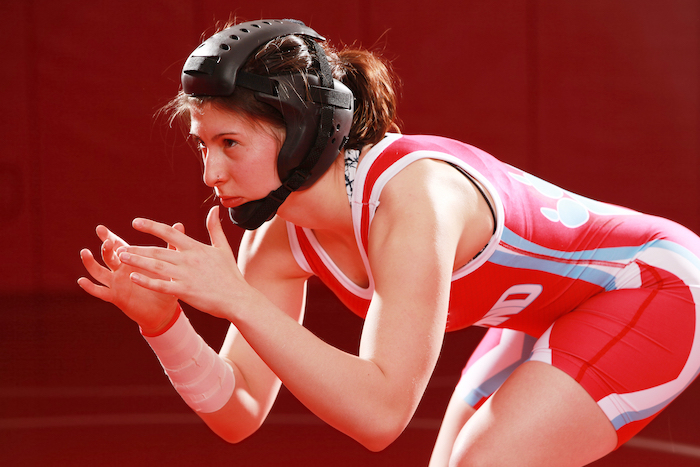 "I was constantly stealing my brothers' outgrown singlets."

Rachel Forsman, a junior at Eastern Regional High School in Voorhees, New Jersey, had watched her older brothers wrestle throughout her whole life. "It wasn’t until sophomore year when it became approved as a girls' high school sport in New Jersey that I decided to join the team," she tells Girls' Life exclusively.

Once a male-dominated sport, wrestling is now opening up opportunities for young girls in high school as they pioneer a new league and build confidence on and off the mat.

Madison Valentino, a senior at Kingsway Regional High School in Woolwich Twp, New Jersey, is experiencing her first year on the girls' wrestling team. Before wrestling, Valentino participated in soccer, karate, volleyball and cross country. "I have never competed in a sport much like wrestling," says Valentino. She explains that despite different backgrounds, her team has really bonded: "We became a family and it probably has to do with the fact that wrestling conditioning is no piece of cake and we are all going through it together."

When Valentino first began the sport, she was "nervous about wrestling in front of a crowd," she remembers. "However, once you step on that mat, it is just you and your opponent. You cannot hear anything except for maybe your coaches and it's the craziest thing."

"I actually became interested in wrestling this year," explains Angelina Travaglini, a senior at Eastern Regional in Vorhees, New Jersey. With a background in track and field, Travaglini watched her brother and cousin wrestle growing up. "But I personally had never tried it until [my coach] persuaded me to try." Travaglini admits that people "are certainly shocked" when they hear she wrestles. "It’s stereotyped as a men’s sport, so hearing that I’ve joined is definitely a shock to some," she says.

Valentino agrees and admits that being judged for wrestling can be tough. "Many people believe that wrestling is a boys' sport...but we don't let that stop us from kicking butt on the mat," she tells us.

In co-ed opportunities, the girls don't mind wrestling boys. "It’s a different kind of challenge," says Travaglini. Generally, the boys know more wrestling techniques, "which in the long run makes me better, allowing me to learn how to get out of rough situations."

"Clearly I have less finesse than those wrestling for years compared to my recently acquired skills," says Forsman about one of her biggest obstacles on the mat. "For female wrestlers, [it's about] getting past that initial learning curve and becoming confident in your abilities."

Through a growing popularity and acceptance, Valentino is proud to say that her team at Kingsway is one of the biggest teams in the state. "We are very proud of that," she tells GL. "Seeing girls wrestling is inspiration and encouragement for other girls to come out and try this incredible sport. At least that was what it was like for me." At Eastern, the team is gaining popularity as well. Forsman says her team had three girls last year. "This year, [there were] 15 sign up and we ended the season with 5 really strong girls," she says.

Travaglini agrees that wrestling is creating new opportunities for girls. "Women shouldn’t be nervous or feel like they aren’t capable of wrestling because of past stereotypes," Travaglini explains. "People are realizing that we are fantastic at it, too."

Would you try out for your school's wrestling team? Comment below!