Scientist-in-training Sydney Clark shows the boys how it's done 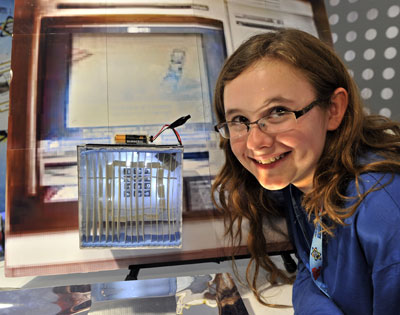 Think science is only for nerdy boys? Think again! Meet Sydney Clark, the 12-year-old runner up in the National Middle School Science Competition, sponsored by 3M and Discovery Education.


Hailing from Austin, Texas, this home-schooled chick has always had an interest in science. After watching her favorite program, hit T.V. show Myth Busters, Sydney couldn’t wait to tackle the Young Scientist Challenge. The challenge was to create a video about everyday safety. She decided to focus on the public’s love for anti-bacterial products. “It’s important to stress that hospitals use anti-bacterial products,” she says, “but they make way for bigger germs.” The quirky and fun film took her about a month and a half to create with the help of her mother. With stop-and-go animated film clips and Barbie props, she made her point…and impressed the judges. Soon, she was making tracks through the competition.

The judges chose a semi finalist from each state, and then the 10 semi-finalists were brought to New York City, where they are asked to conduct live experiments, compete in challenges and complete scientific analysis. 3M provided the finalists with the products that they must use. In one challenge called the Safety and Security Innovation, Sydney took on the task of ATM Security by creating a box made with the world’s most efficient translucent man-mad mirror. The thin reflective sheet not only provides the ATM customer with the ability to see through to the push pad to enter their pin, but it also reflects the image of anyone behind them, keeping their bank information completely safe.

While Sydney did not snag the coveted first place prize, she says the laid-back atmosphere made the event an amazingly fun experience—“the best time I ever had in my life!” She re-calls the judges and coaching staff being “really helpful, really amazing being around and helping on other innovations.”

Being a runner-up isn’t without its perks, however. “It’s almost as good as winning,” she says of her prize: Flying to San Francisco to be on the set of a live taping of Myth Busters at the end of June. While she’s not sure if she’ll actually get to be on the show, she’s got her fingers crossed!

Sydney isn’t a 24/7 scientist-in-training—she’s part of the rock group Unsocialized and has dreams of a film or T.V.career. But she does admit that she’d love to incorporate science in the mix and create a show like Myth Busters or Bill Nye the Science Guy. Why? She’s ready with an answer: “It’s important to get more girls into science,” she says. “I want to let girls know they can do more in the science world and it can be fun changing the world. We can learn more, do more and reach a lot more people.”