Miranda Finn sings Music for a Cause 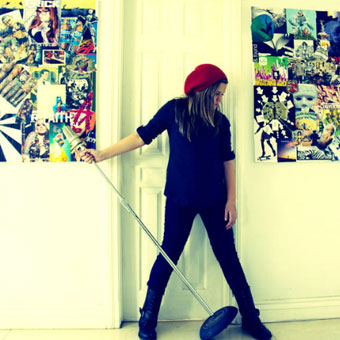 Miranda Finn is proof that when it comes to dreamin’, you’ve gotta go big. This weekend, the singer/songwriter will perform at the Music for a Cause festival in Santa Clarita, Calif., part of the American Cancer Society’s Relay for Life. A few weeks ago, she released her first EP on iTunes. Before that, her song “Maybe I Can Change This World” was selected as the theme song for the viral Bald and Beautiful Barbie Facebook movement. And did we mention she just turned 12?

Her recent success has been a dozen years in the making—Miranda says she’s known she’s wanted to be a singer/songwriter since she was born. But this middle schooler isn’t letting it go to her head.

“I’ve been lucky enough to have an EP produced because people believed in me,” she says, “like my mom and dad, and my producer Avishay Goren, who was actually introduced to me by my 8 year-old brother, if you can believe that!”

Next up? An album for which she’s already writing songs. Miranda’s role model is Taylor Swift, another young lady who shot for the stars. She admires Taylor’s ability to turn stories from her life into songs that so many people are able to relate to, and says she’s working hard to do the same.

“I once met with someone big in the music industry,” Miranda says, explaining her desire to pen her own music and lyrics. “He told me there are a lot of good singers out there but only a few write their own music.  He really inspired me to work on my original songs.”

But it’s certainly not easy. Miranda spends most of her free time honing her craft. She takes music, voice and dance lessons as often as she cans, and clocks many, many hours writing and practicing her songs. But no matter what, she won’t let anything—not even criticism—get her down.

“When I was little,” she says, “my mother read me this story called The Lupine Lady about a little girl whose grandmother told her that before she got too old, she should find a way to put something into the world to make it more beautiful.  So when the little girl got older, she planted flowers wherever she went to make the world more beautiful. My music is my flowers. If I get bad criticism, I just remember that.”

We’re betting Miranda is that secret garden just waiting to be discovered. It’s only a matter of time before we see her songs shooting up the charts, just like idol Taylor Swift’s.

To learn more about Miranda Finn, visit her online at MirandaFinn.net or on Facebook at Facebook.com/MirandaFinnMusic. Wanna download her EP? Click here to get it on iTunes.

» What to do now to make sure your summer rocks