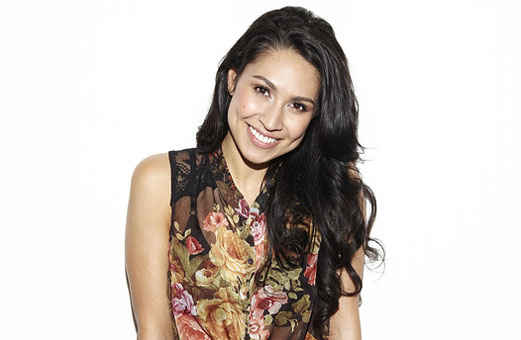 Not just anyone can make it in the entertainment industry, especially in Canada where there are less acting opportunities, but Cassie Steele, a Toronto-born actress and singer, proves that she was born to entertain. The 22-year-old actress, famous for her award-winning role as Manny Santos on the Canadian high school drama Degrassi: The Next Generation, now stars on the new show The L.A. Complex. Having acted since childhood, Steele created herself around her passion and is growing into the person and actress she was meant to be.
Cassie started off competing in singing competitions. Songs from Disney’s The Little Mermaid being her favorites, she remembers “being really nervous and not winning, of course.” Though she may joke about her singing abilities back then, the entertainment world instantly attracted her.
“With music you’re expressing yourself, so it was a natural progression to acting,” she says. “My dad took me to my first acting class when I was 8 or 9 and I fell in love with improv. The people that were in the classes were so different and so free, and that’s what I really love about the industry.”
Just a few years after starting her first acting class she landed her life-changing role on Degrassi. Starting when she was 11 and continuing for the next decade, Cassie immersed herself in the high school universe her character lived in…even though it meant forgoing a real HS experience. Would she go back and rewrite that chapter in her life? Absolutely not, she says. Cassie says she loved being on set with friends, and through Manny, could “imagine what it’d be like to be [attending a] real high school.”
Since accepting the role on Degrassi, she’s recorded three albums (the third drops soon!) and shot the movie Degrassi Goes to Hollywood, which, Cassie says, inspired her new show and character, Abbey of The L.A. Complex.
“I’m just really excited to show people what I can do now,” she says. “Hopefully they like it.”
Looking forward, she admits she’d love to get into film because it would give her more time to work on her music. Of T.V., she says, “There are so many breaks where you can’t work on your music and the songs that you’d written four months ago aren’t relatable to you anymore and you have to write a new set of songs.”
But don’t mistake Cassie for one of the many do-it-all actresses craving nothing more than the spotlight.
“I don’t think my goal is international stardom,” she tells us. “This is just something I really love and want to do. I've done it all my life, and I just know I want to do this and keep growing. There’s always that thirst for knowledge about the art you love, and I really want to take off into film and try out new characters.”
Her dream job? Definitely joining the league of actors taking on legendary roles. “It’d be lovely to get a job where I played a superhero,” she gushes, mentioning her obsession this past summer’s The Amazing Spider-Man.
But whether she’s the next Wonder Woman or simply the girl next door, we know she’ll always be living by her own best advice. “Just be true to yourself,” Cassie urges.
“If it’s something you really love to do, you can’t take anything too seriously,” Cassie says. “There are going to be 99 rejections to your one win, and that’s just the way it is constantly trying to find a new job in this profession. You just have to be confident and not wear rejection on your sleeve.”