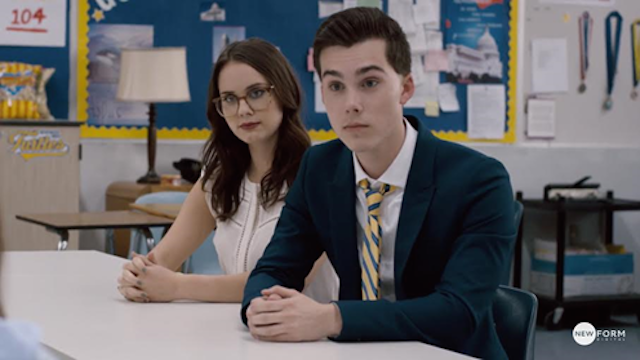 Imagine your mega-protective older sister suddenly decided to get real (like, really real) and answer every burning question you've ever had about anxiety, friendship, periods, boobs and more. That's Arden Rose's YouTube channel in a nutshell. The 21-year-old Arkansas native who was a self proclaimed "geeky-artsy kid" in high school shares her amazing life via social media, and we *love* tuning in. Her Instagram is #goals, her YouTube videos are chatty, personal and beautifully filmed and her Twitter is always LOL-worthy. The digital creator, who has been eager to act for years, is now starring in New Form's newest show, Mr. Student Body President.

The series follows Arden as Hadley Pulito, the chief of staff to Berenger High's power-hungry new student body president, Tyler Prendergast (Jeremy Shada). The two team up to dominate during Tyler's reign. From squashing disputes between nerds and jocks to taking on the new school principal, the two are a force to be reckoned with. Admittedly, Hadley can be somewhat intense (she's downright bossy, TBH) but even still, Arden says she's super relatable.

"She operates as someone in the world who just gets [things] done," Arden shared. "She is what you wish you could be in high school, just not caring about anyone or anyone's opinion of you."

Wowza—if we could just completely not care about what anyone thought of us ever, that would be great. But that'll take some time...so until then, we asked Arden to share her tips for making the most of middle and high school. Here's what she had to say...

"Do as many extracurriculars as you possibly can. I actually started a Scrabble club at my school, which is the coolest thing I can say. The crowd that I got from my Scrabble club was a completely different crowd than the one that worked with me in art class. I think branching out in a way that almost makes you really uncomfortable leads you into pretty cool places."

...but don't freak about it

"Don't worry about not being involved in organized sports or anything like that. I was super, super scared to stop doing cheerleading, which was something that I did from middle school into high school. I felt like my identity really rested in that. It took me a year to really delve into the fact that I did not want to do it anymore and it was okay to quit it."

"Try to learn a language. That's such a mom thing to say—it really is—but I took French for five years and I retained un petit peu, which is 'a little bit' in French. But it has carried me into my adulthood. I visited France a couple times and it's very interesting to see a part of a culture and be able to slightly understand what people are saying."

"Realize that people are just other people with problems and mistakes, and everyone says things they shouldn’t and thinks a certain way when they shouldn't."

"I went to school...but I never went to organized school events. I missed out on so many fun friendship moments because I didn't want to have to hang out with anyone when school was over. If we did something on weekends, I always found an excuse to not be a part of it. I don't have many friends that came from my high school, and I think part of that is because I distanced myself a lot from the community of my school. "

The 10-episode series, which premieres today, stars other amazing social media creators like Meghan Rienks, Gabriel Conte, Grace Helbig and Alexa Losey and you can watch it right now on go90.

Which one of Arden's tips will you use this school year? Share your thoughts on the series in the comments below!