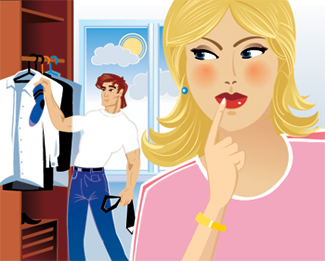 My brother is 17 and has a girlfriend who is 16. They haven't met f2f yet, but they talk to each other every day. They've "broken up" about 5 times, but have been going out since September. The problem is that her dad hates him. Majorly dislikes him. He's been trying to reason with her dad, but things still aren't working.

On top of that, he asked her to marry him and she said yes. They're not even old enough to move out, they haven't met f2f and yet they're engaged?! I'm the only one who knows about this! He hasn't told my mom or my dad. So I'm kind of stuck in the middle and I don’t know what to do. I think he’s rushing because he wants to join the army and wants to know he'll have someone to hold on to and love him while he's overseas.

Hey babe! Well, that is a very valid assumption to make, because it happens A LOT. I've heard of lots of people in the military getting married very quickly after meeting someone because of the fact that they're going to be away and don't want to lose the person they're dating. But that, in my opinion, is not the best reasoning for wanting to get married. And I'm right with you thinking wh-wha-WHAT?

He hasn't even met this girl face-to-face, yet he wants to marry her? There are many different aspects to a person -- physical, mental, emotional. Sure, he may love her personality and all, but what if there's just something about her in person that drives him crazy? What if she's messy? What if she has weird eating habits? What if she's a horrible kisser?! All of these things need to be learned about a person before you can decide to spend the rest of your life with them!

So, we're on the same page here. It's crazy! But, what do you do about it? I think it's important that you maintain a trusting relationship with your brother, so you should try to talk some sense into him first before you go spilling to the 'rents. Tell him you're concerned about him, because that's a huge step to make with someone he's never actually met, and you don't want him to make a bad decision that could hurt him in the future. Get his view on things and try to at least talk him into waiting until he gets to know her more and could have her father's blessing.

I think you probably won't need to go to your parents, because they'll find out eventually (it's not like he can do it behind their back and hide it or anything!). And I'm sure they'll have plenty to say about it themselves. Remind him that something like this definitely isn't going to help his position with her father, and to be honest, it's important to most girls that the man they love gets along with their family and vice versa. Advise him to take some time to work things out before he goes joining a family that apparently hates him. In the end, it's his life and his choice. Hopefully he won't make the wrong decision -- but if so, sometimes people just have to be left to learn from their mistakes...