Do you simply eat too much sometimes, or do you have an eating disorder? 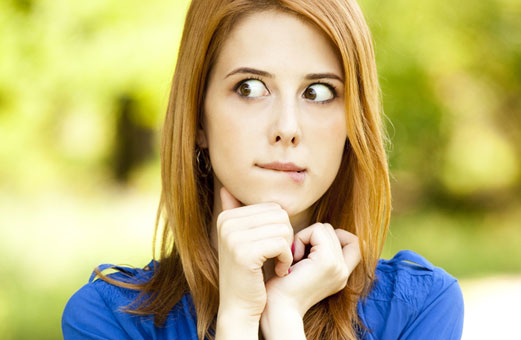 We admit it, sometimes, we have a tendency to stuff our faces. Sometimes food is just so good, we can’t stop. Sometimes, we have a craving we can’t satiate. And sometimes, we’re just hungry, darn it. But there’s a possibility this occasional overeating thing could become a serious problem, an eating disorder called binge eating (BED). We asked registered dietitian and fitsmi.com head wellness coach Kitty Finklea to discuss the differences between overeating and binge eating. Here’s the scoop, sweeties.

“Overeating is simply when you eat past the point of fullness,” Kitty says. “It can happen for a number of reasons – waiting too long to eat, eating mindlessly when watching TV or on the computer, overindulging on holidays and other special occasions, or maybe just because those fudge brownies taste really good! Overeating can cause weight gain if it happens regularly but it is not an eating disorder.”

But, Kitty says, “Binge eating is different.” It affects up to 5 percent of the population and more prevalent in women. “It’s defined by frequently overeating a large amount of food in a discrete period of time (less than 2 hours), and feeling both out of control and distressed,” she adds.

This year, BED was added to the “official” list of psychiatric conditions published in the Diagnostic and Statistical Manual of Mental Disorders. They define it as something that occurs at least one a week over a 3-month period, Kitty says, and during that time, the eater has to meet at least three of the following symptoms:

- Eating much more rapidly than normal

- Feeling disgusted, guilty and/or depressed after an episode

- Eating large amounts even when not physically hungry

- Eating to the point of physical discomfort

So, what should you do when you or a friend has or might have a problem with an eating disorder, or disordered eating?

Kitty urges you to find help. “If it’s you, seek support, by talking to someone you trust and get help from professionals trained in eating disorders. A team and holistic approach includes support from your doctor, counselor and a nutritionist.  If it is a friend, let them know your concern in a safe and loving way and encourage them to get professional help.”

Eating disorders have serious consequences to your physical, mental and emotional health, babes, and it is incredibly difficult to beat them by yourself. Please don’t hesitate to reach out—you can conquer this. For more information on eating disorders, go to nationaleatingdisorders.org.

POSTED IN disordered eating, binge eating, Do I have an eating disorder

What lipstick color do you love?