This opinion essay reflects the thoughts of the author.

You've probably heard of the term "pretty privilege" floating around the internet recently. But, what is it actually and is it *real?* What better way to investigate the phenomenon than through Gen Z's favorite app? You know it, you love it—TikTok.

What is pretty privilege?

Although beauty is certainly subjective, society's beauty standards are not. There are very specific yet ever-changing ideals that give beauty an extremely narrow criteria, allowing only a select few to make the cut. Those who do fit are blessed (and also cursed) with different treatment and in most circumstances social benefits by those who view them as attractive. Whether you've experienced it or not, we're all aware of pretty privilege and the power it holds.

The dark side of beauty trends

It's been long ingrained in our social consciousness that the dream body shape is the thin hourglass—big boobs, small waist, big butt.

I GOT CURRY ON MY TOP ##hourglass ##cringe ##fyp ##xyzbca

Those who achieved or were blessed with this body type are often idolized for just...existing. They're praised and rewarded for doing the bare minimum because they're doing it in the perfect bod.

It poses questions like "do they really have amazing style or are they just skinny?" 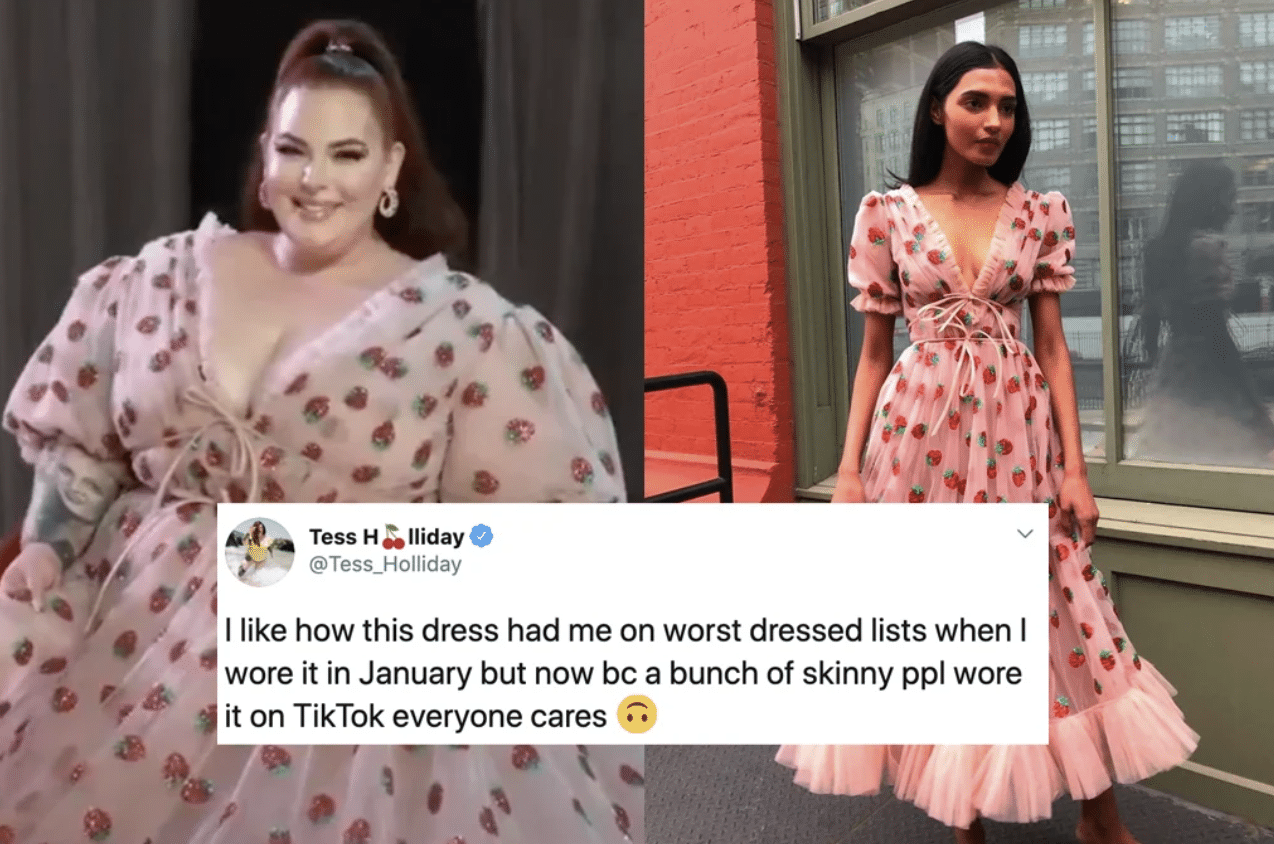 Now there's absolutely nothing wrong with a skinny girl with an hourglass figure posting videos or pics of herself when she's feeling pretty. She's perfectly entitled to feeling herself and we stand by that 100%. The issue lies actually in the responses and implications that it brings.

This is what I eat in a day!

Videos under the "what I eat in a day" trend challenges creators to show all the food they consume in a day. Sounds wholesome, right? However, if you examine closer, the responses to these TikToks are laced with body dysmorphic and pro-anorexia undertones.

Most of the “what I eat in a day” videos that blew up were created by skinny, conventionally attractive girls, usually sporting small, infrequent meals. By sharing what they eat in a day, these girls are selling a certain look, an appealing body type. If this is what they eat, then by replicating it, others will be able to look like them. The problem is that all bodies are different, and even if you eat the same exact things as your favorite influencer, it doesn't mean you won't be able to pass as their twin.

To make matters worse, the comment sections of such videos are packed with thousands of concerning sentiments like “guess i'm not eating anything for the next 3 days," "just when i started liking my body,” “you know what, i'll just eat ice,” and "suddenly i'm not hungry anymore."

Fatphobia's no stranger to the internet, and such comment sections are its side effects. Society has created one of the young girl's biggest fears: being considered "fat." The word itself holds so much stigma and is used as a go-to insult for girls, which is obviously, incredibly problematic. Despite everything, people are socially programmed to think in binaries—if skinny is "good" then fat must be "bad."

While being thin is basically a universal beauty standard for girls, "pretty" still remains an unreachable label for most.

If your nose moves while saying this you’re perfect.

The side profile is one of many among teen girl insecurities but stands out especially for girls of color. The reason? Nobody nose. (Sorry, dad joke.)

The perfect nose is small and button-like, creating a slight, sleek diagonal from the side view. This type of nose is found disproportionally more in those born with eurocentric (favoring Western or European civilizations) features. Brown, Black, Indigenous and Asian girls are much less likely to be born with a natural nose of that shape, so they are automatically excluded from "perfect." In fact, many BIPOC teen girls are duetted under the trend with non-white features that are deemed as unappealing.

Unfortunately, the nose is only a small ripple in a vast sea of racially skewed beauty standards where BIPOC girls are destined to drown.

What's the one dance trend that started it all?

We reckon that the only way you haven't heard of Charli D’Amelio is if you don't own an electronic device. The TikTok royal's ticket to fame was the biggest dance of 2019—the "Renegade." It might seem dated now, but don't tell us you don't remember the intense grip the dance and song had on literally every single young person ever.

However, the dance Charli owes her over 121M fanbase to wasn't even her own creation. 15-year-old @jalaiahharmon, an African American TikToker, created arguably one of the biggest dances on the entire internet, yet it's not her who's the face of Dunkin.

There's a reason why teen girls with BIPOC features are way less likely to make their way into the virality algorithm, much less the beauty one. (No need to shade Charli either because the problem certainly supersedes a few TikTok celebs.) It's the same reason why creators like Charli are able to turn into stars overnight off the dances of POC creators whose names are never remembered. It's the years and years and years of reinforcing the idea that Eurocentric beauty is the only beauty, that POC features are undesirable.

It wouldn't be a viral app without some high-tech, complicated coding and construction. In this case, TikTok's sophistication in algorithms is more concerning than it is admiring.

How pretty does TikTok think you are?

The beauty algorithm assigns a numeric value to rank the attractiveness of the people in the video. The more algorithmically attractive a person is, the more they get promoted on people's fyp, the higher chance they go viral, and TikTok likes viral. It knows that people are more likely to interact with videos when they find the creators to be attractive. 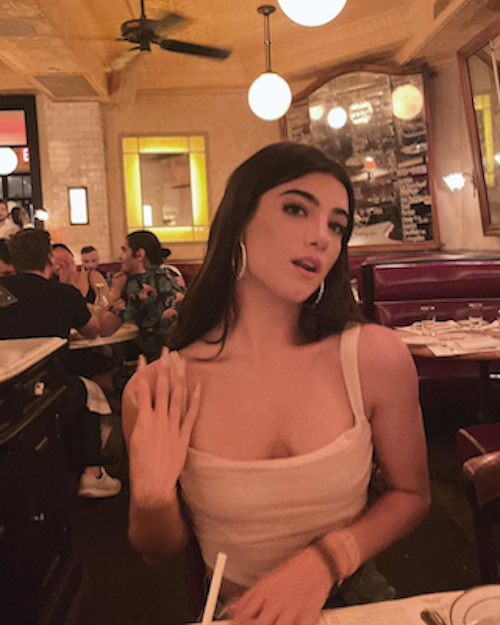 Three of the most followed people on the app—Charli D'Amelio, Addison Rae and Bella Poarch—are all there because they're pretty. Now, that's certainly not all they are—they're also dancers, singers and probably lovely girls—but that's all they are to the algorithm. Their content effortlessly brings in millions upon millions of views because the algorithm likes their looks.

The single most liked video on TikTok (over 50.9m likes) is a simple video of Bella Poarch bobbing her head to the beat of "M to the B." If that isn't pretty privilege...what is?

So, is pretty privilege a real thing?

It's the ugly truth. "Pretty" people will always have a leg up over others in life and by that, we mean people who fit society's exclusive, Eurocentric norm of beauty. The whole point of exclusive is that only a very select, elite few will be able to reach that standard, creating an enormous chasm between normal everyday girls and the influencers, models and actresses we put on pedestals. 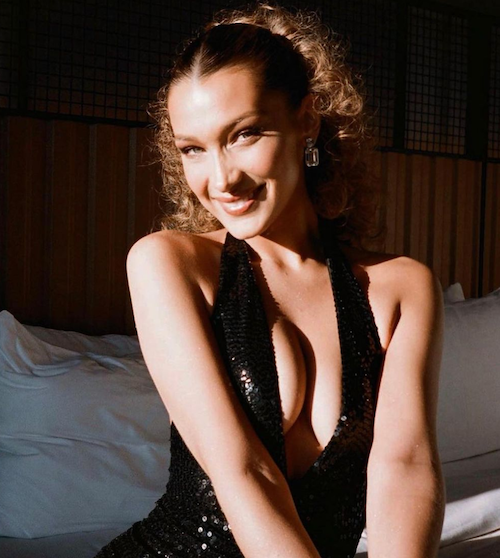 We're all affected by pretty privilege, and our beauty biased have been subconsciously learned and built since birth. In fact, you might've only clicked on this slider because you saw a gorg pic of Addison—and that's totally okay, as long as we're recognizing and talking about it.

Lots of girls feel uncomfortable acknowledging their own attractiveness and what advantages it brings them in life because they're afraid of seeming snotty, conceited or unbecoming. However, this only heightens comparison and toxic beauty culture, dividing women and girls further.

People don't like talking about their own privilege, whether that's being white, straight, cis or well, pretty. But, the only way to make progress is to keep raising awareness of these phenomenons and systems in order to dismantle harmful look hierarchies.

It’s so exhausting to keep seeing the same problematic trends snake their way through social media, hindering diversity and all different types of talents. This goes for all platforms, not only TikTok. It makes girls feel terrible, whether they're on the receiving end or not.

We can and *must* do better.

Whatever happens, just remember that pretty is a state of being and not a look fed to you by big companies and CEOs who profit off the insecurities of young girls. And although it may seem like a contradiction (how can everyone be beautiful because then that would mean no one is beautiful), let's ignore paradoxes for once.

You *are* pretty—don't let anyone tell you otherwise.

Did you learn something new? Tell us on Instagram @girlslifemag!