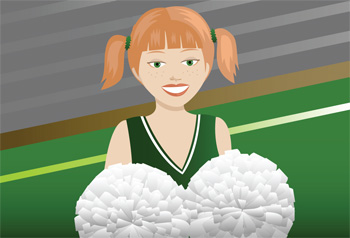 Well, okay, I have a major issue and I really need someone’s help! I need some good advice! So, this year I am the captain of the cheer squad! It’s so fun, and I get a lot of attention! But the problem is, there is also a co-captain. And she keeps on trying to takeover at practice and stuff! And on her Myspace profile, it says “I’m cheer captain.” BUT she’s not! She’s co-captain! And she goes around telling people she’s captain! And well I just don’t know what to do should I talk to her??? And one more thing, she’s not even nice! She is so rude to our cheer squad, and she’s always telling me how much everyone sucks! And I tell her not to say that because that’s so mean and not true at all! And she can’t say stuff like that!  So what should I do? Maybe talk to her? But what should I say? I need your help fast before things get worse and she tries to takeover more!!! Help?

Hey, cheerleader! Okay, sounds like someone's power-trippin' fo'sho. First of all, to my understanding, if there is a co-captian, then there are two. "Co-" means equally or together. So technically, you and this other girl are BOTH captains! There is no one captain and then a co-captain. Thus, it's def okay for both of you to claim the captain title! You two are sharing a position with the same amount of power to keep your cheer squad in tip top shape.

Although you probably can't do much about the whole co-captain business, because in the end, you two are the same positions, you can def do something about her attitude towards the team. Luckily for your team, they have someone like you to respect them and keep a positive attitude. I totally think you should talk to your co-captain. You should let her know that the attitude she holds towards the team will eventually hurt the squad members later on. Not only is it mean to say that everyone "sucks," her rudeness towards the members will only break down the team, not build it up.

Take caution not to attack her, but to gently guide her. You can totally do this without turning this into a huge catfight or argument. If you think things may get out of hand before you speak with her, I highly suggest you to talk it over with your coach. Take his or her advice as well! Good luck!


<3, Sharon
GOT YOUR OWN TOUGH STUFF SITCH? CLICK HERE to submit your own problem to be answered on Girl Talk!