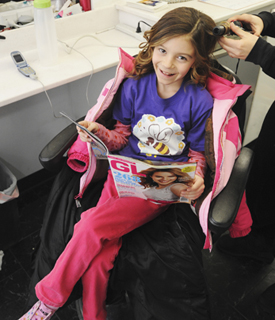 You might have seen her in one of her recurring roles on Disney Channel’s Sonny With A Chance or Good Luck Charlie. And if you haven’t? Eleven-year-old G Hannelius is one to watch!


G’s teaming up with Ramona and Beezus hottie Hutch Dano this August for the Disney Channel Original Movie Den Brother. The flick follows Alex Pearson (Hutch), a self-centered hockey star who, after being suspended from the team for showboating during a game, must step in as leader for his sister Emily’s (G) Bumble Bee troop once the old den mom resigns. While constantly babysitting a gang of elementary school-aged girls doesn’t sound enjoyable, nor does posing as “Mrs. Zamboni,” the “new” den mother, Alex finds humor in persuading Emily and her four closest Bumble Bee buds to do his household chores in exchange for faux merit badges. 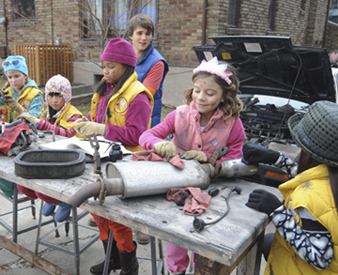 Emily loves everything princesses and pink. And, hey, we kinda do, too. But the ever-so-animated and super cool G screams total bestie material even more. GL went out to the Den Brother Utah set to hang with the hip chick and discovered she’s just as normal as every other gal…

The Name Game
G’s real name is Genevieve, so why does everyone call her G? “It came about when I was a little baby. People would just send cards saying G and Baby G instead of Genevieve.”

Flying Solo
While G plays a little sis in Den Brother, in real life, she’s an only child. But, hey, there’s nothing wrong with that: “I kind of like that I get a lot of attention to myself, but sometimes I'd like a sibling to play with once in a while.”

“I actually like washing the dishes once in a while. [But I hate] making my bed. My mom nags me about it a lot.” 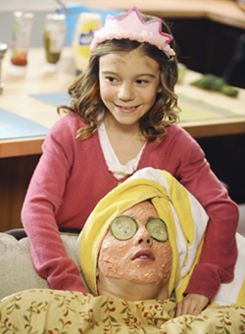 It’s a Rap
“One thing that you probably wouldn't know about me and Hutch [Dano] is that we really like to listen to Eminem. He's got good lyrics. [I like] ‘Lose Yourself’ because it's about never quitting at what you really want to do and believe in.”

Total Tweet
Check out G’s official Twitter account at twitter.com/g_hannelius. Why does she heart tweeting as much as the next girl? “I love that I get to talk to my friends. A lot of my friends from [my hometown in] Maine still live there and some don't have cell phones, so it's just easy to keep in touch and update me on what they're doing.”

Be sure to catch G and the rest of the Bumble Bee gang when Den Brother premieres Friday, Aug. 13, at 8 p.m. ET/PT on Disney Channel.

Want more behind-the-scenes scoop from the Den Brother cast? We’ll be bringing you tons of fun coverage in the upcoming weeks. Stay tuned!