The Man and the Merry-Go-Round 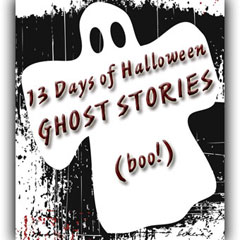 Here's a story written by a GL reader for our 13 Days of Halloween Ghost Story Contest. Let us know what you think and be sure to check each day for another ghastly tale!

The story begins in the town of Farmersburg, Iowa, about 20 years ago. There were two twin girls that lived near the park, and they liked to go play on the merry-go-round just after dark. They would sit on opposite ends of the merry-go-round and push each other around with their feet.

One day the two girls saw a man they had never seen before jog past the park. He was wearing a black jogging suit and slowed down when he jogged past them. The two girls were scared and they ran home and told their parents, but they told them that is was just one of the men in the neighborhood going for a jog.

The girls decided they were right, and went back to the merry-go-round the next day, only to see the scary man again. This time he stopped and looked out from under his hood at the girls, and the girls became scared again and ran home. They told their parents, but their parents told them that if he looked at them again, they should say hello.

So the girls went back to the park the next day, and when the man came over to them, they said hello and asked him if he wanted to play with them. The man said yes. He laughed evilly and slaughtered the two girls with a knife.

The girls’ parents found their daughters dead on the slowly spinning merry-go-round. Blood stained each side where their dead bodies lay. The two girls were buried beside each other, but their killer was never found or brought to justice. The town had tried to get rid of the bloodstains on the merry-go-round, but they would not come off. Twenty years later, the stains have only faded.  They will never go away.
Got a ghost story? There's still time to enter GL's 13 Days of Halloween Ghost Story Contest! Each day through Oct. 31, we'll be posting our favorite original ghost stories

written by GL readers. Will yours spook our socks off?
ENTER NOW! Email your story to youwroteit@girlslife.com or click the blue SUBMIT YOUR OWN button below.

POSTED IN You Wrote It