What's beautiful? A peek at girls around the globe 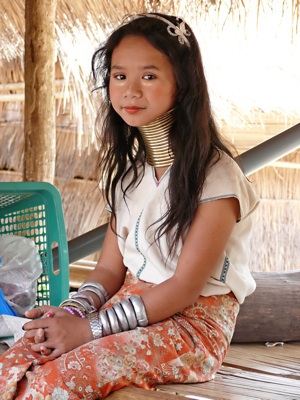 So, you’re 13 and in complete hysterics about how you have to go about “beautifying” yourself to get that cute guy in your Bio class to notice you. You’re dabbling with makeup, wondering if your outfits are cute and tottering around in heels. Have you ever stopped to wonder if your idea of beauty is the same as other girls’ across the globe? In some parts of the world stretching your neck, chiseling your teeth or even tattooing your lips is what makes you the apple of some guy’s eye.
In Mauritania, West Africa, having plump arms, thick ankles and a big booty is what gets the fellas going. In villages here, being plus size is what is considered beautiful. The bigger the girl, the more guys like her. Though it does have its health risks, girls continue to pack on the pounds to meet their soul-mates.
In China, women bound their feet for centuries. Can you imagine having all the bones in your feet broken when you’re 12, then wrapped and re-shaped? Centuries ago, having itty-bitty feet was considered the highest standard of female beauty. Girls would undergo this process to achieve the coveted three-inch foot length. This practice continued into the early 20th century, but has since died out.
Think lip piercings are cute? Near the Amazon River in South America, women have their lips pierced to insert a disc, often made of wood. This act stretches a young girl’s lips and she continues to wear them until she reaches her desired “beautiful” length. Afterwards, the discs are only worn on special occasions.
A long neck has long been a sign of woman’s gracefulness. In subcultures of African and Asian societies, brass neck rings are used to give girls and women the appearance of long necks. Most notably are the Kayan women who reside between Thailand and Burma. At a young age, girls have rings placed on their necks and as they grow older, more rings are added. Now that’s what you call having weight on your shoulders! The weight displaces the collarbone and rib cage, giving the appearance of a longer neck. If the rings were removed, the neck wouldn’t be able to sustain the weight of the woman’s head. Can you imagine?
While we still value an hourglass figure today, our appreciation of a teensy tiny waist doesn’t have anything on 16th-century Europe. Back then, girls had to go through something called “tight-lacing” to achieve the ultimate waist. Their corsets were tied tighter and tighter until they got really small waists, much like America’s Next Top Model winner Anne Ward. Some women still wear corsets and even remove ribs to achieve this extreme look.
But that’s not all. The Karo women of Southern Ethiopia cut themselves along their stomachs, leaving scars that attract men in their community. In some cultures in Indonesia, girls have their teeth sharpened to align their spirits and make them more beautiful. New Zealand’s indigenous Maori women tattoo their lips and chin in blue ink to attract their guys. They believe that a woman with full blue lips is the most desirable woman of them all.
What’s the lesson to be learned here, ladies? Beauty comes in all shapes, sizes and colors of the rainbow. While more global communities enhance their idea of womanly beauty in superficial ways—with rings or ink or surgery or scarring—we like to think the world is coming to accept a girl’s natural beauty as being the best of all. Cast your vote for natural beauty by accepting yourselves, sweethearts, and embracing your gorgeous body (and totally brilliant brains).

THINK YOU'VE GOT A BODY BLUNDER? CLICK HERE to submit your own problem to be answered on Girl Talk!