One more reason to check out Super 8 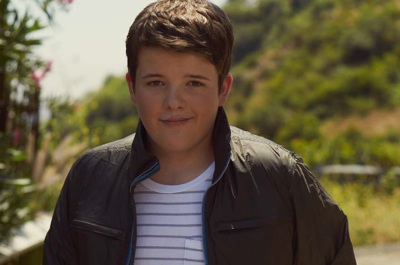 Still not convinced that the super mysterious Super 8 is going to be one of the most fab flicks of summer? Getting to know Riley Griffiths, who stars as the main character’s bud Charles, has definitely moved onto the ever-growing list of reasons why we at GL are stoked to see the movie when it hits screens this Friday, June 10.

We already have a hunch this flick, also starring Elle Fanning and Joel Courtney, is going to be fab. But there are some other things Riley (who, by the way, had to gain a whopping 30 lbs for his role) thinks are just as super right now. Here’s what we found out when we caught up with the budding star…

Super 8’s part of his life in more ways than one. “Me and [my co-star] Joel [Courtney] always make up tricks in the pool. We made up one called the Super 8. You run forward and then spin and do a half back flip. We’ve definitely belly-flopped a few times.”

His summertime anthem is “Dynamite” by Taio Cruz. “Every time I hear that song I think about just hanging in my friend’s garage.”

He’s a big fan of watermelon. Yum! “Watermelon’s the bomb—hands down. It’s my favorite summer snack.”

He’d love to live in the 1940s. “The old time gangsters from back then were really cool.”

He’s a goofball. “When I was little, my friends and I loved Lord of the Rings. We staged sword fights, put paper towels over our shirts and squirted ketchup where the blood was.”

He’s an awesome gift-giver. “When we wrapped [Super 8], I got Joel a headphone that plugs into his phone and it was a banana. You could hold it up to your ear and talk into it. He loved it. He just walks down the street talking on his banana.”

Riley tells us of Super 8, “It’s got great special effects, the music is fantastic and there’s a great storyline to it.” So, will you be seeing it in theaters this weekend? Blog about it, babes.
Photo Credit: Brian Higbee
Love this post? You'll heart these, too!
» Buh-bye, boredom! Check out GL’s sizzlin’ summer entertainment guide

WIN IT! Enter now to score a trip for two to NYC + tickets to a Broadway show!