Have you been bullied? Share your story (and win Chicken Soup!) 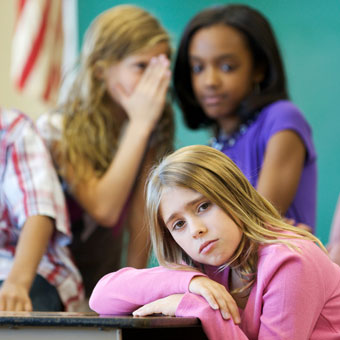 Want to stomp out bullying? Join us as we spread awareness during the month of October for National Bullying Prevention Month. We’re starting the storytelling with an excerpt from Chicken Soup for the Soul: Just for Preteens:

“The Bully and the Braid”

“Somebody’s gonna get beat up,” announced May Jordan while casually leaning against the monkey bars. Frozen by fear, the group of students surrounding May silently hoped that her latest victim wasn’t among them, but they knew full well that there was always a chance.

“We’ll see after school,” she said before flexing her large muscles for effect. Meanwhile, I hugged my Cabbage Patch Kid on a nearby bench, trying desperately to ignore the lump in my throat; it now felt the size of a small tangerine. I couldn’t wait for recess to end.

I loved school, I really did. But since May had transferred in, Elliott Elementary had become an uncomfortable place. At approximately five feet eight inches, May was the tallest kid in our fifth grade class, and, in fact had already sprung well above every student in the school. Although her height was intimidating, it wasn’t a problem -- her attitude was. No part of the student population was beyond the reach of May’s menacing taunts: She routinely hurled insults at innocent third graders who were too afraid to defend themselves; she blatantly bullied boys during gym class; she even threatened to snatch the patches off the sashes of Girl Scouts.

After carefully looking over their shoulders so as to ensure that May wasn’t within earshot, many students contended that she was all bark and no bite. But I wasn’t so sure. I had managed to fly under May’s radar -- and I wanted to keep it that way. But all that changed when I showed up for school one morning with a new (albeit unoriginal) hairstyle. Apparently, by wearing my hair in a French braid, I had managed to change my fate.

It all started when my best friend, Jaime, said my hair looked nice. I noticed May’s piercing glare -- and it made me uncomfortable -- but I remained focused on my math worksheet. Then came May’s daunting proclamation as she passed me in the cafeteria:

I was scared. But what really sent me into a tailspin was when May, who was now clear across the room, moved her fingers to imitate a pair of scissors in motion. My stomach dropped to my knees, and I immediately came up with a plan, which involved hiding out in the bathroom at the end of the school day so as to avoid running into May on the walk home.

I awoke the next morning with a start and scurried to the bathroom to watch my mother get ready for work. Although my watching her had become routine, she knew something was up.

“What’s wrong, Courtney?” my mother said, while sweeping the apples of her cheeks with blush.

“You’re lying. Tell me the truth,” she persisted.

“May Jordan wants to cut off my braid,” I sputtered with a mouth thick with saliva; tears began to fall.

“She’s a bully,” my mother said earnestly while taking my chin in her hand. “She thrives on making others scared, that’s all. Don’t be afraid of her, Courtney. If she can see that you’re not afraid, she will stop. I’ll bet she’s like everybody else -- she just wants to fit in and make friends. Perhaps she just doesn’t know how.”

I rolled my mother’s words around in my head. She did have a valid point. May wasn’t so great at making friends. Maybe -- just maybe -- underneath all that toughness was a regular fifth grader who simply wanted to be liked. Did I have what it would take to befriend May? I wasn’t sure, but I wanted to find out.

Later that morning, I told Jaime that I had made the tentative decision to talk to May.

“Maybe not,” I replied. I didn’t quite believe my own words, but I realized that, for the first time, my curiosity outweighed my fear.

After lunch, I approached May at the pencil sharpener and went for broke: I invited her to come to my house after school. “We could walk home together, if you’d like. Maybe watch the Nickelodeon channel?” I offered. (I’d be lying if I didn’t admit that I was somewhat pacified by the idea that I’d be on home turf, under the watchful eye of my parents, where little could go wrong.) Still, I was proud that I had extended the invitation.

Then, something unprecedented happened. Something that I would not have believed had I not seen it with my own eyes. May smiled. And then she said yes.


I don’t remember what we watched on television, or what my mother prepared for our after-school snack. But I do know that I went from ruing the day I wore a French braid to school to realizing that it had become the catalyst for a new friendship.

May Jordan never bullied me again, and, in fact, we became pretty good friends. After spending countless afternoons at my house, I quickly realized that, yes, underneath the tall girl’s armor was an insecure fifth grader who wanted nothing more than to be accepted.

I’ve since learned that the old adage, you can’t judge a book by its cover, certainly rings true, and that someone who looks different on the outside can really be just like you.

Win big! We’re also giving away 3 copies of Chicken Soup for the Soul: Just for Preteens. All you have to do to enter is send us your story—you’ll be automatically entered to win. Sorry! One entry per person, even if ya send in multiple stories. The winners will be chosen randomly and emailed for their mailing address so we can send you your prize.
Heart this post? You’ll love these, too!

POSTED IN giveaway, bullying 101, how to deal with a bully, I'm a bully, express yourself, You Wrote It, poetry, short stories