What happened to your face? A true story about bullying 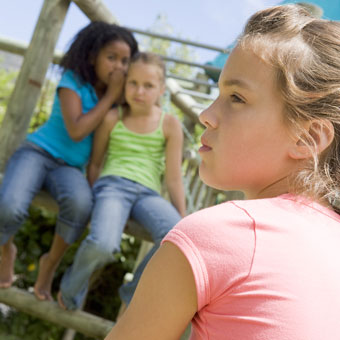 Throughout the month of October, we’re publishing your stories about bullying to spread awareness and stomp it out. Here’s a totally true tale from a real girl just like you.

“The first time I was bullied was in kindergarten. I had fallen off my sled onto ice over the weekend and had scratches all over my face. I went to a school where 4 and 5 year olds were in the same kindergarten class. That day, a couple of the 5 year olds who had bullied me over the course of the year on a much smaller scale now had the perfect target.

Sitting in the morning circle I could feel all the eyes on me. I was quiet and shy. I didn't like the attention but didn't know what say. I was pretty terrified. When the room was silent, one the boys called out, "What happened to your face? Did something attack it? You are so ugly." I sat there silent.

The teacher didn't hear but the rest of the class did and they all thought it was pretty funny. The rest of the day was trick after trick. Teasing and torturing, with quiet me doing nothing. I went home and cried that night alone in my room. I was embarrassed by myself and I thought they were right. Soon, of course, I found out they were wrong, but what they said and did I still remember almost 10 years later.

I never thought it could be that bad again, but I was wrong. Through middle school, I have dealt with pretty harsh words. Girls can be sooo mean. I have been told some of the worst things I can think of. I know I don't have it bad at all compared to some people, but this year it’s settling in. I will come home some days on the verge of tears. Nothing’s worse than being told you’re ugly when you try to make yourself look super pretty in the morning. Or when you’re told you’re bad at something when you give it your all, and they make it obvious they don't want you on their team.

I have friends, but not in my classes, which makes you a target. You’re the only one without a group, feeling like you’re interrupting a conversation, and getting sympathy from the teacher. Being so quiet, it is so hard for me to stand up and make friends but I know what it’s like to feel alone. I know at some point in time, everyone does something to bully someone, but some people face it all their life and it’s tough.

Since I know how it feels, I am the first to be there for other victims because at some point, that one friend can make a huge difference and save you from falling into the trap.

Every time I want to give into their ways, I listen to Taylor Swift’s song "Mean." It makes me realize how I am such a better person than they are and one day they'll be on the bottom instead of the top.”