Support the Bald and Beautiful Barbie for childhood cancer research 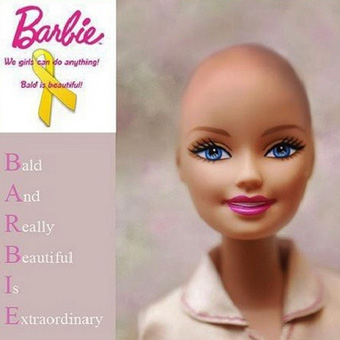 Mattel’s signature Barbie Doll is known for her big dreams, on-again, off-again relationship with Ken and luxurious long blond hair. Girls across the world have begged their parents to purchase the dolls that are just like them. But what if a little girl, like hundreds of thousands of little girls around the globe, had cancer or alopecia or trichotillomania? Shouldn’t there be a Barbie just for them?

Just before Christmas, Rebecca Sypin and Jane Bingham decided there should, and they started a Facebook page and petition to try to get Mattel to introduce a “Beautiful and Bald Barbie.” Rebecca’s 12-year-old daughter and Jane herself have struggled through cancer treatments, losing their hair—but not their hope—in the process.

When they submitted their idea to the toy company, however, they received a form message in response: “Mattel doesn’t accept ideas from outside sources.” Hmm…

This month, the mission has gone viral. To date, 133, 199 people have liked the Facebook page and over 9,700 have signed the petition, which formally asks Mattel to create the doll and donate part of the profits. While the petition itself doesn’t ask the company to donate proceeds to childhood cancer research groups, the thousands of comments it has garnered show overwhelming support for such a move.

POSTED IN disease, cancer 101, do gooder