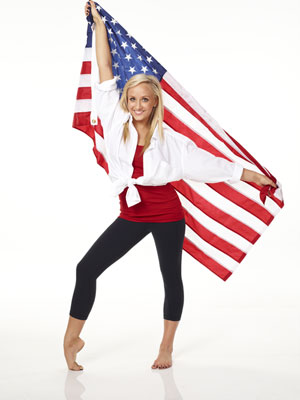 You don’t have to be headed to London this summer to have an Olympic-size dream. Whether it's running your first 5K or making the field hockey, going after big goals takes tonsa hard work—and plenty of guts—before you get that glory. Here, four Olympians share the lessons they've learned on their way to the top.

You dream of playing professional beach volleyball just like your hero Kerri Walsh. But as of now, your serves are subpar and your digs are just decent. Before ya bury your head in the sand, think small. “I set mini goals that build to a big one,” explains Kayla Harrison, 22, a world champion in judo. “Like, I want to be the first American Olympic champion for judo. But first, I have to be ranked in the top 14 in the world. And to do that, I have to train a certain amount of time a day.” Achieving the small goals gives you motivation as you build to your ultimate dream.

Whatever major thing you're gunning for, don't go at it alone. “My teammates are my friends and I look forward to seeing them each morning and night,” says star swimmer and world record holder Missy Franklin, 17. “We always support each other through the very tough sets.” If you don't have teammates to lean on, share your aspirations with a supportive bud or family member. “My best friend Katie made me a pump up playlist before a big competition, plus another one with pick-me-up songs in the event that I didn't do as well as I hoped,” says Kayla. “It's really helpful to know she's there for me no matter what.”

Everyone has blah days—even top athletes. Just ask 2008 gold medalist gymnast Nastia Liukin, who draws on her mom's advice when things are off. “She's always said, 'Never quit on a bad day.' You may make mistakes and want to give up, but you've got to go back out there and try again.” Nastia confesses there have been days when she didn’t want to head to the gym for a seven-hour workout. “The days when you're feeling your worst and you have to drag yourself off the couch are the ones that make you stronger in the end,” she says. “They're what makes you a champion.”

Failure Is Your Fuel

We admit it: Setbacks suck, especially after you're thisclose to success. But instead of letting failure smash your spirit, use it to boost ya up. “When I was 13, I was about to compete at my first Junior World Championships when I snapped the ligament and broke bones in my thumb. I couldn't compete and I was devastated. I thought my career was over,” says Kayla. But instead of getting hung up on the injury, Kayla let it fuel her motivational fires. Once her thumb healed, Kayla worked harder than ever to return to the World Champs. Four years later? She won!

Yep, it's awesome to achieve something major in your life. But what's the point if you're not having any fun? When Missy traveled to China for the World Championships last year, she made a point to enjoy every second of the experience instead of fretting over her flip turns. “This helped me relax and manage the pressures of the meet, and I was able to contribute five medals to Team USA.” It's key to have a good time while you're at it. That way, all of that hard work doesn't have to feel like, well, work.

There's a reason you hardly ever see a champion lose her cool. What truly separates a winner from the rest of the field is her ability to stay composed in every sitch. “It’s intimidating at international meets,” says Missy. “But when the time comes to perform, I know I’ve done the work necessary. It all comes down to confidence and faith in my abilities.” To calm her nerves, 17 year-old elite diver Jessica Parratto sits in a quiet place, listens to music and visualizes her dives. “I think back to practices when I nailed the dives, and that gives me the confidence boost I need.” When you're feeling stressed, find a spot to relax, breathe and think about the task before ya to keep those nervous butterflies at bay.

Surround yourself with words and pics that’ll keep you working every day. “I write out my goals and my favorite quotes on my mirror with dry erase marker. I also have an inspiration board in my room,” says Nastia. “Before the Beijing Games in '08, I put pictures of the gold, silver and bronze Olympic medals on the board. Seeing them every day was a great reminder of why I was training so hard—and I wound up winning one of each.”  Hang up kick-butt quotes and pictures. You'll be more driven than ever to go for the gold!

What are your plans today?

Quench skin with oil-free hydration that won't break you out. $6
CLICK HERE TO ENTER