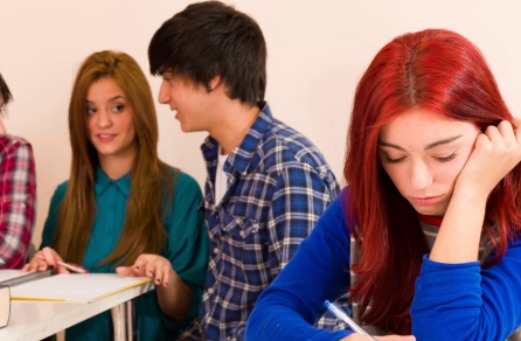 Hey girlies! Here is a personal essay written by a GL reader just like you. Read it through and tell us what you think about the topic she’s tackling in the comments.

Weight is an issue for many teenage girls. People are constantly uncomfortable in their own bodies, and the looming threat of obesity makes it hard to feel fully confident. The "fat" issue is a major problem in developing a high self-esteem. But what about the other word? What about the girls who feel they are too skinny? Seems pretty stupid, doesn't it? Trust me, it's not.

I've always been thin, even as a child. My first memory of any negative remarks about my weight go back to the third grade. My friends and I were talking about the 'cute' boys at recess, and I asked Ella if any boys had a crush on me. "Well," she said, considering her options, "Will said he might think you're cute if your legs weren't so skinny."

Bam. The first remark that embarked a down-hill spiral about my body image. The fact was, Ella was a liar and we all knew it, but either way she had no right to say what she did. This wasn't the last remark from Ella either. For years after she periodically noted about my twig legs, each time speaking about it as if it were a completely new revelation. Ella was on the rounder side, and she was probably just jealous, but it didn't matter. She kept making fun of my thin legs, and laughed at it, thinking it was some big joke. Would she find it funny if I called her fat? Probably not, but apparently making fun of a thin person’s weight isn't as big as a deal.

I became more and more used to these remarks as I grew up, but eventually my group of friends changed and I was receiving more negative remarks about not only my legs, but also my flat chess and scrawny stature. My "best friend" Grace would always remind me how I was more flat-chested than she. Always. Coming from the second-smallest girl in the class, I should have just ignored it, but I couldn't. She was really rude about it.

She wasn't the only "friend" who made fun of me though. Penny called me some pretty rude names, and Leigh one drew a picture of our group, drawing everyone curvy except for me. I was straight up and down, and that stung.

My issues weren't only with remarks, but with the thoughts I began to have with myself. I felt uncomfortable in bikini bathing suits because my ribs where so prominent. Jean shopping was a nightmare because nothing ever fit me right. Skinny jeans always sagged, and by the time they actually fit me in width, I'd have outgrown them in length.

By the time I reached grade seven, eating disorders had become more well-known, and people would tell me that I should eat more, or go to McDonalds, or whatever. What nobody knew was that I ate a lot—way more than my weight would signify. I wasn't the type of girl who didn't go for seconds, or shy away from dessert.

These remarks stayed with me for awhile, but by the 8th grade friends like Penny and Leigh had matured enough so as not to tease me anymore. Grace was a different story. Her remarks followed me until I got my first period before she did. That shut her up about some aspects, but not them all. The worst was one day on our way to gym she said "Stacey you’re so skinny! You're like, anorexic." That was the worst thing anyone had ever called me. And then several months later in the same situation she called me anorexic again, as if she had forgot she had done so in the first place. I never said anything, but looking back I wish I had.

I'm in high school now, and things are better. I filled out and grew a lot taller. I'm happy to say I finally love my body. Instead of people telling me I'm too skinny, they admire my long legs. I still have insecurities, but changes in my overall appearance have altered them, and I love myself a little more now. I guess the point is, that even if you think your being funny, or kidding, or complimenting someone by calling them a rude name about being too thin, you're not. You're being straight up rude and are causing self-esteem issues. So please remember that calling someone "stick thin" is just as bad as calling someone a "fat cow."

Want to showcase your work? Whether you like to dabble in creativewriting, swoosh some strokes on a canvas or snap pics, send us your poems, short stories and artwork to youwroteit@girlslife.com OR just click“Submit Your Own” below.
Plus! Love to sing, dance, act or play an instrument? Shoot over a video of your star-worthy performances! It could be featured right here!

+ Score major swag and sign up for the Buzz Babes newsletter

+ Girls’ night in! Prep your party with our V-Day Sleepover guide

POSTED IN express yourself, You Wrote It