The Idol contestants kicked off the week with their own renditions of country classics.  With country music star, Randy Travis, guiding them in the right direction the top 11 gave it a go—some better than others....

First up was Michael Sarver singing Garth Brook’s “Ain't Going Down ('Til the Sun Comes Up).”  Michael’s memory of the fast paced lyrics was definitely impressive, though his performance was not his best. The song didn’t showcase his true vocal capabilities and the judges agreed that he should have made another song selection. B 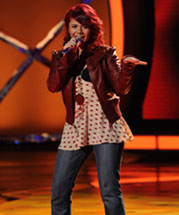 Allison Irahetta took the stage next singing “Blame It on Your Heart.”  I have been an Allison fan every week and this country performance proved that she could totally sing the alphabet if she wanted to and still sound amazing (as Cara would say). Allison gave the song that rock edge we all can’t get enough of and her vocals were powerful as always. Randy thought her performance was dope and I definitely agree! A+ 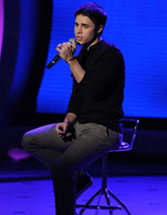 Third was Kris Allen with “Make You Feel My Love.” His performance was totally heartfelt and his beautiful rendition of the song left me with goose bumps. The judges thought he came across as honest and pure and Simon even used the word “terrific” to describe it. I hope to hear more of Kris’s strong vocals in the weeks to come! A 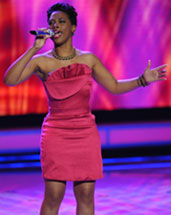 Next up was Lil Rounds singing “Independence Day.” While she has an extremely powerful voice, Lil (which Simon still cannot pronounce) was totally out of her element.  She def gave it her all, but another song where she could showcase her strong attitude may have suited her better. The judges sensed her discomfort as well! B 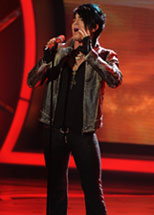 Adam Lambert rocked the stage with “Ring of Fire.” Like the judges, I was absolutely speechless when the song ended. The arrangement was totally unique and powerful, but it definitely bordered on creepy. Although I am still having trouble deciding whether I liked the performance or not, there is no denying that Adam can hit those high notes with ease. The judges found the performance strange, but were still impressed. A- 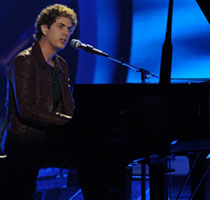 Next was Scott MacIntyre singing “Wild Angels.” He gave a genuine performance and always seems to be emotionally connected to the songs he chooses. While I thought that his vocals sounded strong, I agree with Paula that he should change it up a bit and try performing without his piano. The judges think that his songs sound similar from week to week and I hope that he is able to shake it up more if he stays! B+ 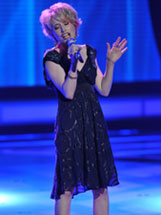 Alexis Grace sings the Dolly Parton classic “Jolene.”  I totally love her soulful voice and think that her vocals are super strong. I do, however, think that the song was a tad rushed and that some places sounded pitchy. The judges miss the “dirty” vibe she adds to her performances and I agree that it was definitely lacking the edge she usually brings to the table. B+ 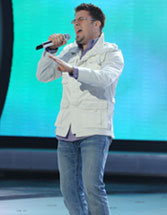 Next was Danny Gokey singing Carrie Underwood’s “Jesus Takes the Wheel.” The song started out a bit slow, but definitely picked up by the chorus. Danny was able to showcase those powerful vocals and his soulful sound began to shine through. While Randy and Cara thought that first half wasn’t as good as the second, Simon and Paula agreed that the performance was brilliant. A- 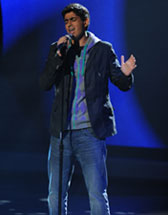 Anoop Desai wowed the audience with “Always on My Mind.” This was def one of my fave performances and I was thrilled that the Anoop I loved from the beginning was finally back! He made the song current and his smooth vocals were strong and powerful. Simon thought that Anoop’s performace transformed him from zero to hero and I totally agree! A+ 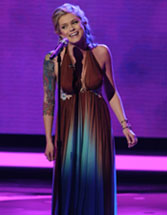 Next up was Megan Joy singing “Walkin’ After Midnight.” There is no doubt that her performance with the flu was definitely impressive, though this was not one of my fave performances. Although Megan has a totally unique jazzy sound to her voice, I was not blown away like the judges were. B+ 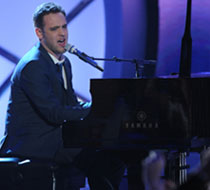 The final idol to go was Matt Giraud singing another Carrie Underwood song “So Small.” Matt has been one of my favorites from day one and this performance totally confirmed why I love him so much! He made the song his own and his bluesy vocals sounded absolutely amazing. He hit all of the notes with passion and the judges think that he has true, authentic talent! A+
Though I had my doubts, country week wasn’t half bad. The idols were able to show another side to them and I was impressed how many of the top 11 mixed their personalities into the songs as well! As for who should go, sadly I have to say that Michael Sarver should be the one. What did you girlies think of the performances? Who should be sent home? Let us know!