Give me some support, please! 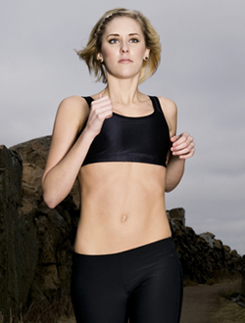 I really need a bigger bra but my mom says I don't need any more. I am literally overflowing out of the ones I have now and it's really uncomfortable. I play soccer and I am ALWAYS  pulling it down to keep it from popping up from under my breasts. I've tried talking to her about it but she says it is out of the question. I think she doesn't want me to grow up, but I'm suffering. Help!

My mom says the same thing. Try asking her again. You don't need a million, just three or so that way you always have one to wear to practice. Make sure you are getting racer back ones that give full coverage and are meant for running around. These are different than the ones they sell for things like yoga, which look more like training bras. They give more support.

Your sports bra WILL shift during the course of working out, that’s just how they are, but it should never be riding so far up that your chest is falling out of the bottom. It might help if you adjust the bra a little. It may be that you're pulling it too far down in the back, which obviously makes it ride up a little higher in the front. It could also be that the elastic on the bottom is worn out, in which case you need to replace it. Your chest should feel slightly compressed to keep everything in place.

If your mom isn't convinced, try the bra on and show her that it just isn't reaching down to the bottom of your chest where it's supposed to be. You can buy cheap sports bras at TJ Maxx, Marshall's and Target, there is no need to go stock up on über expensive bras. Once your mom sees that they don't fit, she will be more open to getting you some new ones.