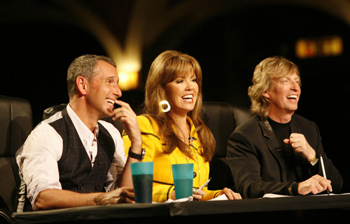 Vegas week has officially commenced as the two-hour special of So You Think You Can Dance
premiered last night and what a show it turned out to be!
The Vegas callbacks supplied viewers with shocking cuts, some superstar standouts to watch, and much more. Judges Nigel Lythgoe, Mary Murphy, Tyce Diorio, Lil’ C, and Mia Michaels were all in attendance to narrow the remaining ninety-seven dancers to a mere twenty!


Here’s how the show went:


The first round in Vegas consisted of ballroom dancing. Contemporary dancers, Phillip Chbeed and Arielle Coker, who had previously auditioned together in Los Angeles were some of the first to try their luck at the more elegant style. With both dancers paired with different partners, it was the ultimate chance to prove they could hold their own. Phillip wowed the judges but Arielle fell short and was sent home. Nobuya Nagahama also “pleasantly surprised” the judges as his unexpected style and grace put him through.

Sixteen more contestants were sent home before the next round… HIP HOP! This round kicked off with a huge shocker as favorite and talented dancer, Natalie Reid, who amazed the judges at her Denver audition, was one of the very first ones let go. Dancing partner and close friend to Natalie, Brandon Bryant, who made judge, Mary Murphy, tear up in Denver, made it through. However, Bryant was told to step it up as he had been labeled one of the ones to watch for the top twenty! 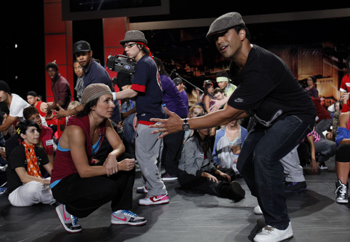 Seven more off, as the night was winding down but SURPRISE! No sleep for these contestants as they are given a random song and told to have a group routine ready to be judged come morning!  Stress and fatigue was wearing down as contestants scrambled to put together the perfect routine.
As the first several groups performed, the judges were in for a rough morning. Routine after routine failed to impress and previous standouts like Eric “Silky” Moore, were asked to dance for their lives later. Finally, the group that called themselves, Nerdography, brought some life back to the judges as they performed a skilled, fun, and funny hip-hop routine. “Silky” was finally given his opportunity to stay alive as he gave a solo of his infamous tap-dancing but judge, Lil’ C, said he was “not ferocious enough” and got sent home. 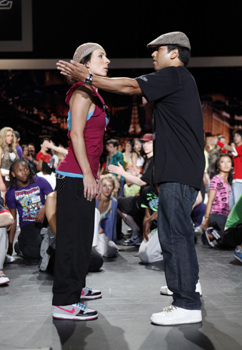 Next up, contemporary dance with judge, Mia Michaels, herself! Cheeky comedic dancer, Tony Bellissimo, who has pleased the judges every time, had trouble with the contemporary style and was asked to dance the choreography again instead of a solo. The judges were getting tougher as fan favorite, Nobuya, was finally cut but it was now time to turn attention to the Kinney sisters and Kasprzak brothers, as all four had had little trouble advancing to this point.  Megan and Caitlin Kinney had been inseparable throughout the entire competition but were now placed in different groups to show off their independent dancing skills! Megan was up first and gave a riveting performance, putting her through to the next round. Caitlin, however, was asked to dance for her life on the spot!  She was given three no’s but was saved at the very last minute by Mary, who said yes and put her through!  Ryan and Evan Kasprzak, on the other hand, had much easier luck, as both advanced in the competition without hesitation. The time came for Tony to give it everything he had as he danced his heart out for the judges and got the chance to go on to the next round proving how committed he was.

Next round, and time for the contestants to be choreographed to a West Side Story routine by judge, Tyce Diorio. This was the last cut down before the judges decide who is to go on to the top twenty.  As the boys got to relax poolside, the girls were in for a grueling day. Many favorites like Bianca Revels, Gabi Rojas, Priscilla Marrero, and Megan Kinney all came to the end of the road. Caitlin Kinney, however, will move on without her sister to see if she will advance to the top twenty! The boys turn was just as gruesome, although favorites like the Kasprzak brothers and Brandon Bryant are still in it to win it!


*All Photo CR: FOX
Sixteen girls and sixteen boys remain! Tonight we will find out who has made the final twenty but what are your votes? Give us your top twenty and we’ll give you ours!  Who were the ones you couldn’t bare to see them let go and which are the ones you wish they had?  Tell us all your faves!