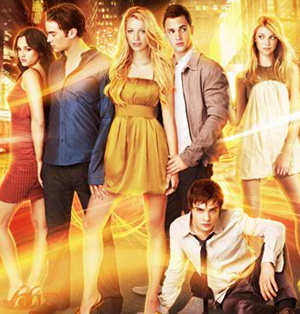 Right now, Monday nights at 8 PM just aren’t the same. What would typically be a time reserved for homework, chatting with friends or chilling with the fam takes on a whole new meaning. During the normal TV season, every Monday night always starts out similar:  I clutch my cell, hop on the couch and a familiar voice toots, “Gossip Girl here...”

Gossip Girl is your typical drama. It follows the lives of fabulously rich New York teens with an equally fabulous wealth of problems. There’s Blair Waldorf (Leighton Meester) and Chuck Bass (Ed Westwick), an overachiever-meets-bad-boy pair that can’t seem to decide whether they love or hate each other. Then there’s Serena van der Woodsen, Blair’s BFF/frenemy. Throw some Brooklyn in the mix with Dan (Penn Badgley) and Jenny (Taylor Momsen) Humphrey, two middle-class prep school commuter—and fishes out of water—and you’ve got a juicy hour of nonstop drama each week.


My friend Rachel and I love watching the show at our respective houses, but we love dishing about the characters during commercial breaks over the phone. Don’t get us wrong, Gossip Girl has its outrageous moments that we just laugh off, but when we aren’t going gaga over Nate or Chuck, we’re drooling at the great clothes Blair and Serena are wearing (me Blair, her Serena), making a point to hit the mall as often as possible, incorporating some of our fave character’s style into our latest purchases. 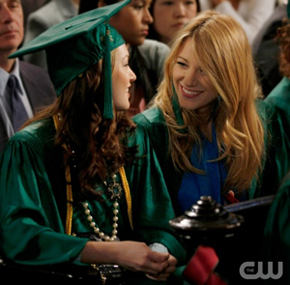 Like a lot of things, we have agreements—and disagreements—on various aspects of the show. While I’m Team Blair (gotta love the preppy clothes and the overachieving--plus, I’m a brunette), Rachel’s Team Serena, citing Blair as too uptight and mean. And when it comes to the guys, we both agree Dan and Serena were pretty sweet and Blair and Chuck have their sparks.

But at the end of the day, literally, Gossip Girl is more than just an editor’s obsession. Sure, the clothes are great, and we both dream of having that Upper West/East Side apartment and wardrobe someday, dating our own Nate or Chucks, but the show brings us together for the time in-between. And in our busy lives, who doesn’t need a bit of R&R, an hour just to watch a show with your friend, even if she's miles away? To that we say XOXO, Gossip Girl!

Do you and your friends watch a fave show together? And are you and your bestie Gossip Girl fans? Blair, Serena, Jenny or Vanessa? Dish it out, chicas!