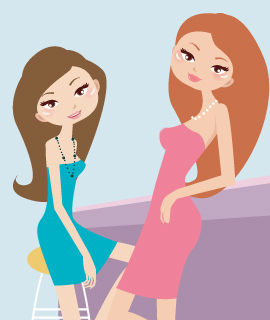 Drama in your clique is totally normal. You and your friends all have your flare-ups: your BFF ditches you for a date, a conceited chica brags a little too much, or your bestie goes bonkers and turns into a total stranger. But which friendship flaws should you accept? Should you cut your chica off or work with your pal on her problems?


PAL PROBLEMO: It's been weeks since you've seen your friend, so you and your girilies plan a special Saturday sleepover. You're all set for your big night—popcorn, DVDs and truth or date ideas, when you get a call from your chica telling you that she's stuck at her aunt's 80th surprise party, so she doesn't think she can make it.


TALK IT OUT OR TELL HER OFF? Hmmm...a droppin' out diva is a hard pal to peg. Does it seem like she dumped ya only 'cause it was a total 911 (as in...a fam member was sick, her li'l sis needed a sitter or she had a blow-out with the BF)? If she lets ya down for reasons that seem legit, time to have a talk with your girl. Something like, "Hey seems like you've been going through a lot lately. Why don't we talk about it over some brunch on Sunday morning?" This way you can see if something serious is up with your sistah.

Does she blow you off time and again? Are her excuses totally lame? (Um, she needs to finish fractions on a Friday night)? If you feel like she's all about excuses, call her out on it. Give her the chance to make her plans on her own sched and see if she backs out of those. If she still doesn't shape up, cut your flakey friend, fast!


PAL PROBLEMO: You REALLY wanted a part your school's production of Romeo and Juliet. Since your bestie is totally into theater, too, you decide to audition together. But, um, your friend scored the coveted lead and you're cast as an extra at the Capulet ball. She's super duper excited about her stardom...and doesn't really seem to know that you feel crushed.


TALK IT OUT OR TELL HER OFF? Is your girl gloating or just basking in the spotlight? If she just seems a little elated, compliment her! If she really is doing grade A work, she deserves a li'l kudos. Give her the thumbs-up but let her know that you're feeling bummed. In the meanwhile, stick with drama but also seek out interests that she won't excel in (she's totally stumped when it comes to Spanish? Hola! Run for el presidente of the Spanish club!).


Is her ego waaay too high? Give this braggin' babe a newsflash that nobody likes a perfect person. If she won't stop practicing her dramatic poison scene at lunch...at your sleepover...at soccer...tell her that she should save the drama for the stage. Does she constantly try to go one step further than you on EVERYTHING ("You got an A in Algebra? OMG, I got an A+!")? Change the subj when she tries to talk about herself. If it doesn't stop, find another sistah who will share the spotlight with you.


PAL PROBLEMO: You sat down for you first day of science and turned around to see...only the cutest guy you've ever seen in your life. You can't wait to tell your number one lady at lunch, but you make her swear she'll keep it on the DL. She promises on her Robert Pattinson photo collection...but um, looks like she spilled the beans anyways.


TALK IT OUT OR TELL HER OFF? This is a pretty serious sitch. Go straight to the source and ask her how the secret was spilled. Did she swear another sistah to secrecy, who told another bestie, who asked their cousin not to call anyone about it...but eventually it got around anyways? Try talking to this girl and telling her that a SECRET means that it's for her ears only. If she's a first-time spiller, give her a second chance but let her know how seriously hurt you are.


If your girl's gossiping galore? Probably best to cut this type of pal loose. If she's more of a busy body ("OMG! Did you hear who Patty kissed at the party this weekend?") then you might wanna hold off on telling her any real keepers. But if she passed this top secret info around with evil intentions or if she leaks your deepest and darkests all the time? Say sayonara to the secret spiller, stat! She's just looking for attention!


PAL PROBLEMO: You love your friend because she's always down for whatever. Whether it's riding the upside down roller-coaster, asking her crush out to the dance or encouraging you to try Indian food...this girl's always gonna do it first and make it seem way fun. Lately, though, it seems like your girl's growing up a little too fast. She's got an older BF and she's going to crazy parties. From the stories she's telling you about Saturday night. you're wondering who your sistah is!


TALK IT OUT OR TELL HER OFF? Could be that your chica is just experimenting with diff cliques and identities, which is totally normal. If she's dating an older dude but he seems to respect her, that's fine. If you're diva is just being her daring self, let her be.


But sometimes a pal takes the walk on the wild side a li'l too far...as in, she's going way too fast in a relationship, she's doing drugs or caring about her grades has gone out the window. If she's pressuring you to take on bad habits, it's time to talk to her. Could be that she's super troubled and just wanted someone to spot that. Lend a listening ear and if the sitch seems serious, encourage her to seek help from a pro. If she doesn't try to change, still seems totally destructive and tries to drag you down, too? Time to cut the troubled lady, lose so you don't go down with her.

STRIKES AGAINST THIS SISTAH:

POSTED IN 411 on fighting with friends, how can I help my friend