Where in the world is my BF?! 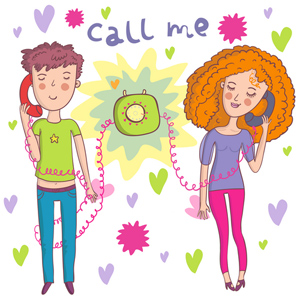 I moved at the beginning of the summer. Then I went vacationing in the same town that my BF lives in. I met up with my friends who said that they had seen my BF around.

This is strange because he said he was on vacation in Germany. So I called his house and there was no answer.
Then my BFF called to say that she just saw him again. What is going on?

Yikes, that’s a toughie. Your friends are telling you one thing but your hearts telling you that there’s gotta be some explanation. Moving is tough and I gotta give ya props for trying long distance with your BF. Def not an easy feat. This is a guy AND friend dilemma since there's really no way to tell who's being honest. Unfortunately, in this situation it looks like ONE of your sources is lying.


So, it's one of two explanations. Either your guy didn't tell you the truth and your friend did see him strolling around town, or your guy is home and your gal isn’t being 100% honest with ya. The signs point to your BF being out of town since you haven't seen him and no one picks up when he calls. Plus, saying you're going to Germany seems a li'l excessive for a white lie.


I don't know why your friend wouldn't be honest with you so for now assume she's keeping it real. She prob thinks she saw him. Talk to her one-on-one and ask her to tell you exactly what she saw. You never know, it could be some look-a-like!  But that doesn't mean you should be in denial of the possibility. There's no need to stress out and jump to conclusions before getting all the info.


Regardless of  whether your BF is home or not, it sure seems like he's not telling you everything. It's a little surprising that he didn't call or send you a letter or postcard this past summer. Since it's time to head back to class, maybe he came back from vacay a little early. You def need to get in touch with him (try sending an email, sending him a message on Facebook, calling his house again or texting). Ask him to be honest with you and to tell you what's up. That'll clear the air. He's your BF, so it's not fair that you feel like you have to doubt him, right?


This is a situation filled with lotsa miscommunications, so you gotta confront both your BF and your friends. I wish you the best of luck with clearing up this prob and good luck at your new school.

POSTED IN my friend keeps lying, boyfriend Q & A, dealing with a breakup, mean