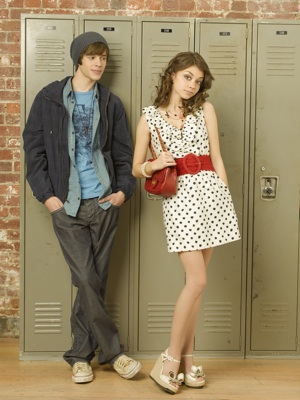 Some say mixing work with pleasure isn’t always the brightest idea. But for real-life couple Sarah Hyland (star of ABC’s Modern Family) and Matt Prokop, it worked quite well.

The love bugs star in the new Disney Channel movie Geek Charming, premiering Friday, Nov. 11 at 8 p.m. Based off Robin Palmer’s book with the same name, the flick’s all about the most popular girl in school (Hyland) finding out there is more than what meets the eye when it comes to the nerdy film geek (Prokop), who has chosen her as the subject for his latest video project.

We had Sarah interview Matt about the entire experience of filming the flick together in Vancouver. Check it out.

Sarah: In the movie, my character is a fashionista. What is your favorite outfit I wear?

Sarah: So how was it working with me?

Matt: It was very interesting. I would look for you all the time on set and couldn't find you.

Sarah: I was at the Craft table a lot. They do have good cheese in Canada.

Sarah: What was your favorite part about filming in Vancouver?

Matt: Definitely not the weather.

Sarah: We both agree on that. The scene we filmed at the beach, I'm surprised I wasn’t blue because I was so cold. How was it filming in that fountain?

Matt: The fountain was fun, but it was really cold. But I toughed it out and feel like I could be a certified stuntman in Canada, which is kind of awesome.

Sarah: Did you meet any cool people—other than me?

Matt: That was the best part about filming the movie. You and I were the only ones who knew each other going into it, so we made some awesome friends. David Del Rio (who plays Ari) in the movie became, I won't say the third wheel, because he definitely wasn't the third wheel, but part of the crew.

Matt: I liked how the three of us would kind of go out every night and just try new restaurants.

Be sure to catch Sarah and Matt in Geek Charming this Friday, Nov. 11. Then come back and let us know your thoughts.

If you could star in a movie with your BF (or crush!), which movie would you want it to be? Blog about it, babes.
Heart this post? You’ll love these, too!