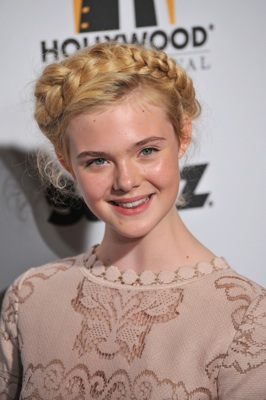 Thirteen-year-old Elle Fanning is certainly not a newbie to show biz. She’s been in the business since she was 3! But in her upcoming movie We Bought a Zoo, Elle is trying out a new sort of character she’s never played. She describes her as “a unique, sort of quirky, funny character.”

In the family flick that blends drama, humor and love, Elle plays Lily, a young girl who works as a waitress at a zoo restaurant and part of a group of do-gooders fighting to save the rundown zoo from ruin.

As if we’re not already loving the trailer of the flick, there are five more reasons we’re totally digging the younger Fanning (not to be confused with her equally-famous older sister Dakota) this second…

“Christmas is my favorite holiday [because] it’s when my whole family gets together. We’re from Georgia, so my grandma always makes all of her Southern dishes from her great-great-great grandma, like hash browns.”

She’s not afraid to be adventurous

Elle may be too young to skydive, but she certainly has guts. “You know that iFLY thing at Universal Studios CityWalk? I’ve never done it, and I really want to. My sister’s tried it, all my friends have. I’ve been sort of afraid to [until now].”

She has a unique style

“I’m very much a ’60s to ’70s girl. I get a lot of inspiration from little baby doll dresses and high waisted stuff.” So sophisticated for a 13-year-old. We love it!

Not only does Elle have time to go to school and star in major roles in Hollywood, she loves to take ballet! “I’ve been dancing for about four years. I go five days a week for about three hours. It’s something that you’re either good or bad at it, there’s really no in-between. I’m trying to get as good as I can.”

She has great beauty advice

Elle’s natural look is the way to go. “My skin is very sensitive, so I always have to make sure, after ballet or whenever, I have a very good skin regimen. I always really moisturize and don’t wear too much makeup.”

Be sure to catch Elle in We Bought A Zoo, in theaters Dec. 23.

What’s your favorite thing about Elle Fanning? Blog about it, babes.
Love this post? You'll heart these, too!
» Our favorite Christmas classics