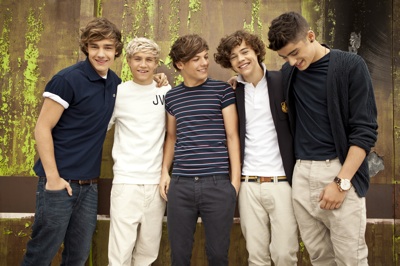 The newest U.K. sensation has now become the latest U.S. sensation! The hot new band One Direction has made their U.S. debut and they are hitting the charts hard.

The boy band has just broken a record by becoming the first U.K. band to debut in the U.S. at No. 1 with a debut album!

I don’t know about you girlies, but I find this to be pretty exciting! If you haven’t checked these boys out yet, you better hit YouTube right now and start memorizing their lyrics. Why? Because these boys are going to get even bigger!

Not only did Nickelodeon just announce a project is in the works with them and the British-Irish boy band, but the guys also just announced that they’ll be embarking on their first-ever headlining North American tour!

Wanna catch Louis, Harry, Nial, Zayn and Liam in the flesh? Check out their tour stops below…

And you better act fast! Tickets are going on sale for their this Saturday, March 24!  For more info, CLICK HERE.

Want more 1D? The boys will be performing their hit single “What Makes You Beautiful” on the Nickelodeon Kids Choice Awards Saturday, March 31. Oh, yea, and they’ll be guest starring in a special episode of iCarly’s “iGo One Direction,” set to premiere the following Saturday, April 7, on Nickelodeon.

Want a peek at what you’ll see if you head to a One Direction show? Catch the boys singing “What Makes You Beautiful” at a recent stop in New York City below…

Will you be checking out the 1D tour? Who do you think should open for them? Blog about it, babes.