Noah Munck spills on girls, Gibby and all things iCarly 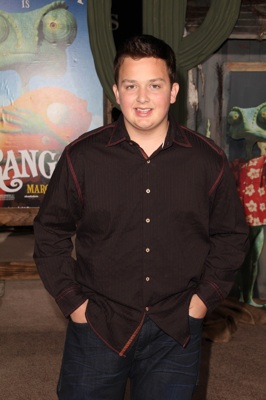 You know 15-year-old Noah Munck as the crazy, funny and ridiculous Gibby on Nickelodeon’s iCarly, and you can rest assured that he’ll be just as strange and awesome in the new season!

Season 5 of the hit show kicks off tonight with a brand new episode “iApril Fools” (catch it at 8:30 p.m. ET/PT on Nickelodeon) and we can’t wait to see what’s in store for all the characters.

To hold us over until tonight’s events, we caught up with Noah to get the inside scoop on his co-stars, the future for Gibby and fun times on set! Check out what he had to say below.

GL: Should Gibby have a love interest this season?

Noah: I would like that! I mean, it’s funny how they’ve evolved Gibby’s character into this ladies’ man who doesn’t really care about girls. He has an attitude like, ‘Oh, whatever.’ But I would love for Gibby to get a girlfriend and maybe cast Hailee Steinfeld. I have a huge crush on her.

So are you like that with the ladies, too?

No way! I like to flirt and respect ladies. I’m not like Gibby in that way. [But] it’s fun to play a character like that. It’s a departure from myself.

What else would you love to see happen to Gibby this season?

A style makeover. He’s been wearing Dockers, khakis and 40-year-old man clothes from the time I’ve been on the show. So, I mean, it would be cool if he could get sweet rocker clothes.

In a nutshell, describe the vibe on the iCarly set.

Funny stuff happens every day. We have inside jokes that are crazy and the creator of the show, Dan Schneider, will come on set and pop out during scenes. We won’t know he’s hiding there and he’ll just pop out and scream as loud as he can to scare us all. It's crazy!

What do you love most about your iCarly castmates?

Miranda [Cosgrove] and Jennette [McCurdy] are the sweetest two people I know. Just to work with them has been an honor. Nathan’s been my bro through this. We play video games together, talk about guy stuff and hangout.

We’re sooo excited for One Direction’s guest appearance in an upcoming episode. What was it like working with them?

It was amazing! They’re just so down to earth. I hadn’t heard of them when they came on, but I am a huge fan of music, so I was like, “Who are these guys?” Now, we’re like bros. I’m getting into electronic music producing, so we talked about that and they gave me [great] insight. It was a lot of fun to have them there.

Not only are you a talented actor, but you’re also big on community service and have gone on some humanitarian trips to Haiti. What was that like?

It changes my perspective every time I go. It’s a refresher of how I should view life because it’s so inspiring to see people who have so little be so happy. It’s like I have nothing to complain about over here. It’s really rewarding to serve over there.

Be sure to catch Gibby and the rest of the iCarly gang on Nickelodeon tonight in an all-new episode of iCarly at 8:30 p.m. ET/PT

Are you excited for the new season of iCarly? Would you like to see Gibby get a makeover? Blog about it, babes.
Love this post? You'll heart these, too!

by Patricia McNamara and Rachael Ellenbogen | 2/1/2016