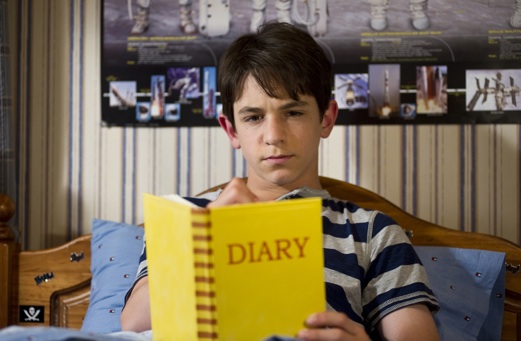 Who doesn’t know Zachary Gordon? The 14-year-old cutie’s been lighting up the screen as everyone’s favorite wimp Greg Heffley in the Diary Of A Wimpy Kid flicks. And now, he’s back! Diary Of A Wimpy Kid: Dog Days hit screens yesterday. Have you had a chance to check it out?

The third installment of the series takes place in the summertime. And while Greg would much rather spend his free time sleeping and playing video games, his mom pushes him to bond with his dad. So, Greg comes up with a plan: pretend to get a summer job so his parents get off his back. And, as we all know, lying to your parents almost always comes with disastrous consequences…

We were lucky enough to chat up Zachary, where he revealed all about co-star Peyton List, zip lining in Vancouver and, what else?, kangaroos!

GL: Why should girls check out Diary Of A Wimpy Kid: Dog Days?

Zachary: It’s a hilarious, hilarious film the whole family can relate to, you know? It’s a great movie based on summer vacation, so it’s totally awesome.

Speaking of summer, if you could spend your vacay anywhere in the world, where would you wanna go?

I’ve always wanted to go to Australia. I hear it’s a great place. I mean, kangaroos are pretty awesome. That’s an up factor.

Any tips you could share about surviving vacation with your entire family?

If you have any siblings, or if you’re trying to run away from someone, just lock the bathroom door and stay in there as long as you can! Always just have fun and enjoy [vacation] while it lasts because, sooner or later, you’ll be going back to school.

We all know your character Greg is a wimp, but what’s one thing you’re really afraid of at the moment?

If there was a really big spider, I’d get really freaked out. And I’m somewhat scared of scary movies that are really believable. My mind totally just [starts running] and I get all these crazy ideas like, “What if that happened to me?”

A lot of our readers are Peyton List fans. What’s one thing you’ve learned about Peyton while working with her on these Wimpy Kid films?

What I really like about [Peyton] is that she’s just really normal. She’s not full of herself or anything like some people in Hollywood. She’s nice, she cares about other people, and I’m glad we’re really good friends.

What are some fun things you two did together while filming this latest flick?

We filmed a tennis scene, so we’d sometimes play tennis in between takes. And we [actually] went zip-lining in Grouse Mountain, which is a mountain in Vancouver. I was nervous because it was the first time zip-lining, but it was really cool.

We already know this movie is gonna be hilarious! But, if you could pick just one, which was your favorite scene to film?

A scene where Rowley and Greg go to this place called “The Boardwalk” and have to go on a ride called “The Crane Shaker.” We shot it at a real theme park and it has a huge, 150-foot tall propeller-like arm and it goes 62 miles per hour. It was crazy! I enjoyed it [so much] I went on [the ride] eight more times.

Be sure to catch Zachary and the rest of the Wimpy Kid gang in Diary Of A Wimpy Kid: Dog Days, in theaters now!

Who’s your favorite Wimpy Kid character? Blog about it, babes.