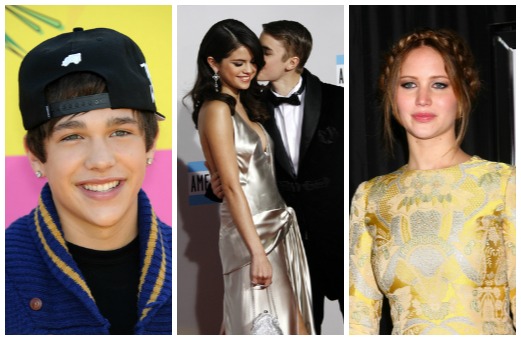 A lot went on with celebs this past week from TV to entertainment news headlines. There were some unstable relationships reconnecting like Justin and Selena and JLaw and Nicholas Hoult. See how Amanda Bynes is becoming more and more like Brit Spears every day. And catch some cute sis bonding pics between the Hudgens girls. Just keep scrollin down for this week’s GL gossip.

Guess who landed roles on season four’s finale of Big Time Rush? Whelp, according to reports it’s Austin Mahone and Alexa Vega! In the final ep, the BTR boys are booked to close the “Big Time Awards Show,” but before taking the stage they find out about an evil plot to brainwash the audience. Do you think Austin and Alexa will be able to help fight back? We can’t wait to see!

Jennifer Lawrence is getting back with her ex?

JLaw hid behind her shades while arriving at the JFK airport this Tuesday. OK, normal. But what’s interesting is reports claim that instead of packing for her trip the night before, she was getting cozy with former BF Nicholas Hoult at a restaurant in LA. Just because the two are set to star in the upcoming film X-Men: Days of Future, doesn’t mean that they have to be getting din together, right? Think they’re giving love a second chance?

We know Amanda Bynes as the cute movie star from some of our fave films. She’s The Man and Hairspray, anyone? But now it seems like things have taken a turn. Amanda’s behavior has become increasingly worrisome to us. After shaving half of her head and tweeting some inapro pics, we fear she’s going down the same path as the old Britney Spears. Some even claim she might need a guardianship set in place. We’re hoping this girl gets healthy soon!

Two girls who aren’t snapping questionable pics? Vanessa Hudgens and her li’l sis Stella. After driving home from the gym in her convertible, V posted some cute pics of the two on her Instagram with the caption “yin yang sisters #bathroomphotoshoots.” Nothing better than some adorable sib bonding.

So let’s get this straight, Justin. It takes your pastor to get you back with your baby, baby, baby? When we found out Selena flew all the way to Norway last week to see the Biebs, we were stunned. Well now the truth has come out. Apparently Justin’s pastor, Judah Smith, begged Sel to fly across the Atlantic to stop our pretty boy from having a ‘breakdown.’ Hey, we’re kinda glad she did because the last thing we want is for that boy to get anymore tats. Oh wait, he already did that, too.

In more Selena news…
Next Tuesday, May 7, Selena’s highly-anticipated music vid shes been working oh-so-hard on for “Come and Get It” is going to be released. We’re beyond excited—but also a little intrigued on how this whole thing is gonna play out. Sel posted pics of filming this week and, um, we can’t even tell if she’s wearing anything under that water. Do you think S is trying a little too hard to be all grown up? She was in Spring Breakers after all.
Which celeb moment made you go “OMG” this week? Share in the comments below.
Love this post? You'll heart these too...
+ Mom's Day movie marathon

+ Counting down the days 'til Catching Fire? Get the latest here

+ Star style smackdown! Who ruled the red carpet?
SO CUTE! Score serious summertime style with our May giveaway!