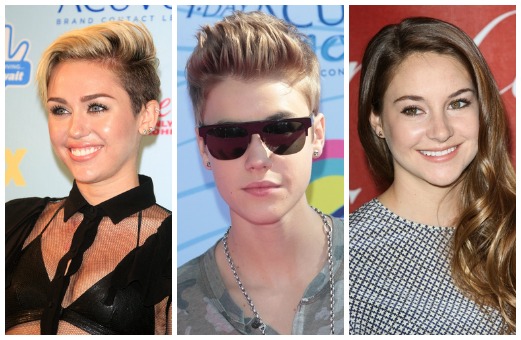 Summer may be cooling off, but the scoop in Hollywood is nothing short of heating up. From new collabs to a new celeb-filled vocab, things were sizzling all over the star-stuffed universe this week. Read on for the scoop.

It looks like Miley and the Biebs are makin’ music together these days. The two have reportedly recorded a song, appropriately titled “Twerk,” along with a few other friends. The duo may not seem like the most likely pair to collaborate, but it actually makes sense, given their history. Both stars are making headlines with their attempts to shake their old personas and act more mature, and this seems like just another step in that direction.

Watch out if you’re on the road near Calabasas, Calif. Kylie Jenner, who turned 16 less than a month ago, has already had a major issue on the road with her spanking new $125k Mercedes SUV. The accident, which involved two other cars, happened on Wednesday and seems to have been caused by Kylie. We’re glad everyone’s OK, but we’re a little concerned that Kylie’s already so casual with her attention on the road. Hands at 10 and 2, Kylie!

Next time your mom or dad asks you what “jorts” are or what on earth a “selfie” is, you’ll be able to refer them to a pretty reliable source. The online edition of Oxford dictionaries announced this week that they have created official definitions for some of our fave slang from 2013. So now, whether you’re rocking some “double denim” or you’re jealous of your friend’s edgy “fauxhawk,” everyone will know exactly what it is you’re talking about.

Even though the official list won’t be announced until next week, Amber Riley has reportedly joined the cast of Dancing with the Stars. Just like Zendaya last season, Amber has a background of dancing on TV, and we’re excited to see how she does on the show. Apparently, she’ll be dedicating this season to her late Glee costar Corey Monteith. If the rumors are really true, we’ll be rootin’ for ya, Amber!

Just call her Taylor from the block

Of all celeb appearances, we didn’t see this one coming. Video surfaced this week from Taylor Swift’s recent tour stop in L.A. and a familiar face popped up: Jennifer Lopez. The American Idol diva graced the stage for an ah-mazing performance of “Jenny from the Block” with our Swifty. Wouldn’t it be amazing if the two paired up in the studio next?

Check out the performance below…

The Fault in Our Stars begins filming

This week, the movie adaptation of The Fault in our Stars began filming (see some behind-the-scenes action here). A few weeks ago, Shailene Woodley, made news for the drastic haircut she got in order to star as Hazel in the movie. While the cut would have gotten our attention anyway, Shailene gets major points from us for donating her ponytail to Children With Hair Loss, a group that gives wigs to kids with medically-related hair loss. Her cut inspired others to do the same, and people have been sharing their pics using #HairForHazel and #ItGrowsBack. Don’t ya love it when celebs give back?!