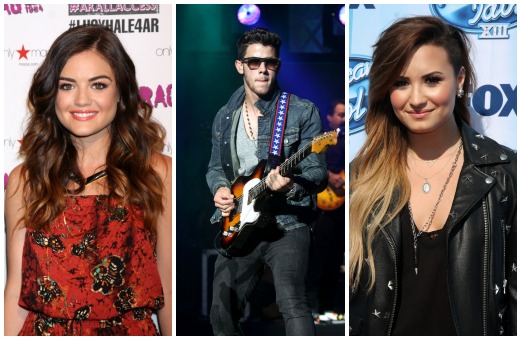 Another week of summer is in the books and that means that now is the time to catch up on what some of your fave celebs have been doing. What amazing collaboration is coming our way and whose performance is going to be a must-watch? Read on to find out.

Rock Out With Your Socks Out

It’s no secret that we are going gaga over 5 Seconds of Summer, and you should be, too. These super talented (and super cute) Aussies have been touring all over the world and they just announced this week that they’ll be back in the States headlining their own tour next summer. The tour is called Rock Out With Your Socks Out and it’s all set to start July 17, 2015. We can only imagine the awesome acts they might bring on the road with them.

The JoBros and Demi Lovato have been BFFs for years ever since their days at Camp Rock. We love that Nick and Demi are the best of friends who always support each other so we weren’t surprised when we learned this week that Demi is actually going to be on Nick’s upcoming solo album! “We did one for my record,” Nick reportedly told E! this week. “It's a great song that we both love. Her voice is just amazing on it.” Eeep! We are counting down the days until we can hear it.

We were already super excited for the MTV Video Music Awards on August 24, but now we are even more pumped. It was just announced that our August/September cover girl Taylor Swift is performing live as well. All the details are being kept super secret but we can’t wait to see what she sings. No matter what, we know that it’s going to be totally amazing.

If you’re like us, then you love Lucy Hale’s style but can never figure out how to pull of the country chic look without wearing just plaid and cowboy boots. Well, we no longer need to worry because it was just revealed that Lucy Hale has teamed up with SoCal Hollister to design two collections! Round 1, which launches August 8, is set to include soft dresses, leggings skirts and tops with Round 2 (launching August 29) to include separates with a more relaxed fit. Are you going to buy Lucy’s new line when it hits stores?