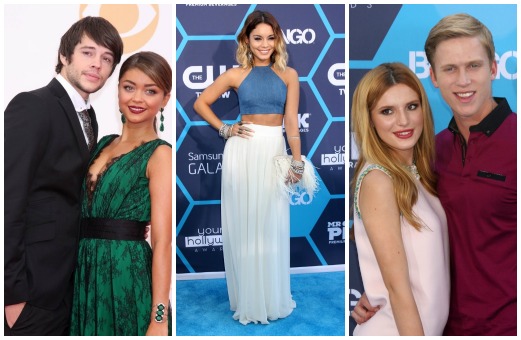 Whew! Another week is over and we’re here to give you the 4-1-1 on what’s happening with your fave celebs. Who broke up, who’s making a major comeback and what was the biggest surprise of them all? The only way to find out to keep reading.

We think that after this week, Hollywood should change its name to Splitsville. Day after day, we got reports about some of our fave couples calling it quits! After dating for 5 years, Modern Family’s Sarah Hyland and her Geek Charming co-star Matt Prokop are reportedly no longer an item. We thought we would never see the day when these two weren’t together. Another longtime couple has apparently hit the rocks. Yep, it turns out that Bella Thorne and Tristan Klier are no longer an item. When a fan tweeted Bella, asking if she was still with Tristan, she reportedly replied with a simple answer: “No, I’m not”. And if that wasn’t enough heartbreak, Divergent hottie Ansel Elgort and his high school sweetheart have apparently broken up as well! We’re not sure the cause for any of these failing relationships, but we are hoping that they can all stay friends!

In the midst of all the breakups, there is a new relationship that is on everyone’s radar. Ariana Grande’s new album just released, but it seems like the buzz is revolving more around her love life. The singer and Big Sean two were spotted this past Sunday holding hands backstage at the VMAs. Big Sean has been featured on multiple songs with Ari and once Ari’s I Heart Radio Performance was released, it was obvious that there had to be something between the two because they couldn’t stop looking at each other. This relationship is fresh and we’re hoping that they stick around. What do you think of the new pair?

In other Ariana Grande news, there is some major questioning happening about her hit single “Break Free.” We’ll be the first to admit that this song is constantly in our heads, but can you imagine someone else singing it? Well apparently it wasn’t originally meant for Ari. Austin Mahone revealed this week that he was approached for the song before her. “They sent it to me and I was supposed to record it, but I never did,” Austin was quoted as saying. And with the song debuting at No. 1, we bet he is regretting that decision now!

2014 is the year of musical comebacks—and we’re not complaining. Word spread this week that High School Musical starlet Vanessa Hudgens is heading back to the recording studio! In a recent interview Vanessa said she’ll be collaborating with her best friend so expect the unexpected. We are only hoping that by BFF she means Selena Gomez. How amazing would that collab be?! OK if not Sel, how about fellow HSM alum Ashley Tisdale? f only time could speed up so we could know more info about V’s latest project.

All eyes were fixed on the TV screen during this week’s Pretty Little Liars’ summer finale. The network had been teasing that someone was going to die but (spoiler alert) when it was Mona who was the one to go, we were shocked! Mona had just found proof that could get Alli locked up as ‘A’ for good when her life was cut short. Now we must wait to find out who the killer behind the dark mask is and hopefully find out the true identity of “A.” Sigh.