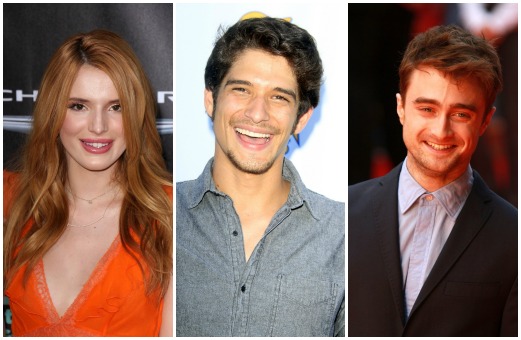 The temps might be dropping in some parts of the country, but in Hollywood, things are only heating up! Which star seems to be taken once again—and which just ended an engagement? Which famous boy band might be breaking up? Read on for the scoop!

Are they or aren’t they? It’s a question we’ve been asking ourselves lately about Bella Thorne and longtime beau Tristan Klier’s relationship. This week, we have a hunch it’s back on. The always-stylish starlet reportedly popped up at Tristan’s Homecoming dance over the weekend in an adorable pink getup—and shared her big night on Instagram. “A great night that I am so grateful for. Loved making all these memories tonight,” she captioned one of the snaps. Knowing this cutie, we bet she had no problem tearing up the dance floor.

DanRad wants a dose of JLaw

Our Harry Potter-meets­-Hunger Games inner fangirl exploded this week when we learned that Daniel Radcliffe has one famous femme topping his work wish list. During a Twitter chat, one fan asked the cutie, “Name 3 actors you haven’t worked with but wish to in the future.” His reply? “George Clooney, Jennifer Lawrence (she’s so cool!), Jeremy Brett (if time travel is possible.)” Yes, Dan, we think JLaw is cool, too. And we think it’d be even cooler if the two of you paired up on the big screen.

It was a sad week for one Hollywood couple. We just learned that Teen Wolf hottie Tyler Posey exclusively revealed to Us Weekly that he’s called off his year plus engagement to childhood sweetheart Seana Gorlick. “We have broken up,” the star said at a recent ASPCA event. “I’m just gonna get it out there because I get sad talking about it.” No word on the reason behind the split, but we sure hope he mends his broken heart soon!

Zayn’s going in a different direction?

Rumors have been swirling that Zayn Malik is working on a non-1D project, sparking fear that the band might be breaking up. It all started when The Mirror reported UK singer Labrinth was teaming up with Z for a new record. "I'm going to do something with Zayn," Labrinth was quoted as saying. "We're going to make a soulful record. 100 percent. No need to freak just yet, though, Directioners. A 1D rep told Gossip Cop this week that such rumors are false, stating, “Fact is, he’s not going solo.” Phew! Even better? The guys just announced North American dates for their 2015 On The Road Again tour. Will you be checking them out live…again?