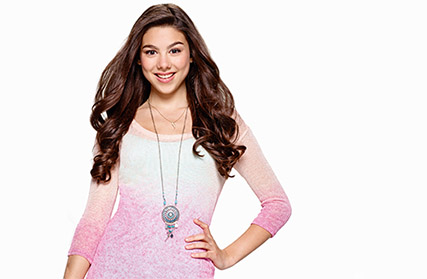 It seems like Phoebe Thunderman and her family are always getting into crazy shenanigans, but Kira Kosarin, the actress behind the super girl, has got it all together. Not only is Kira rocking her TV show role, she also graduated high school at the top of her class. We talked to the 17 year old about Phoebe's new boyfriend, the perfect super power and her best tips for getting ahead. Check it out.

GL: The show comes back tonight! Can you tell us anything about the new episode?

Kira: Tonight's episode is called "Parents Just Don’t Thunderstand" and it’s a really funny episode. Basically, Phoebe and Max turn mom and dad into teenagers again and throw a wild party – which of course goes horribly wrong. It was a lot of fun to shoot and we also have some really fun guest stars. I’m probably going to hang out with the cast and watch it. This is a bunch of all of our favorite episodes from season two.

GL: We can't wait to see it. Can you share anything else we can look forward to?

Kira: We have a bunch of episodes with Phoebe’s new boyfriend, which I think is really fun because that’s a side of Phoebe that we never got to see in the first season. We got to see a lot of her kind of fumbling, trying to be cool in front of a guy that she liked here or there, and almost always it ended up going badly. We get to see a more mature side of Phoebe emotionally because she gets to really like somebody and as a teenage girl that’s just a lot of fun to play. Phoebe's boyfriend is a really cool new cast member who we’ve also become friends with in real life. We’re all really excited for this next bunch of episodes to air. I think they’re gonna be really fun.

GL: Speaking of fun, tell us about filming fight scenes!

Kira: There is an episode that’s coming up very soon (I can’t tell you anything, there are so many amazing spoilers) where I get to do a ten-minute fight scene. They let me do a lot of my own stunts which was really fun. We worked with a stunt double and stunt coordinator to have a cool balance, so I got to use some of my gymnastic training which was really great for me. I ended up stopping gymnastics to do ballet when I was younger, but I can still do back handsprings and walkovers and stuff.

GL: We bet that's good training to have.

Kira: For sure. Having the confidence and balance is really nice because I never even thought about how hard it is to focus on staying balanced and doing fight moves properly and acting at the same time. It’s an odd combination if you’ve never done it before, so having that confidence from my gymnastic training is definitely helpful when we’re doing stunt sequences.

GL: What's your favorite power that Phoebe has?

Kira: Freeze breath is a cool power, but it gets Phoebe into trouble all the time, so I think I’m gonna go with the telekinesis. Also because there are so many times in my life that I wish I had telekinesis. You know when you get in bed and you’re exhausted and then you realize the door is open? All you want to do is just make it close without having to stand up and Phoebe would be able to do that. I’m jealous.

GL: Is that the kind of super power you'd want to have?

Kira: If I could have any power at all, I think the power to stop time would be really cool, especially if you’re running late and you need more time to do your hair and make up, or if you want to get a work out in before you go to school in the morning. Just pause time for a couple of hours and you’re good.

GL: That's a great power for anyone who's as busy as you, too. Do you have any good study tips for fans after all of those years of hard work?

Kira: Don’t wait to study until you have a test. Study as soon as you have the material and when the test comes you’ll already know everything. I studied every day for just ten or twenty minutes, while I was eating or stretching or anything, and by the time the test came, I already knew most of the information. Break your studying up and spread it out over the weeks that you’re learning it instead of waiting until the night before to cram.

What super power would you want to have? Do you think you'll try Kira's study tips? Let us know in the comments below and make sure you tune in to the new episode of The Thundermans tonight (1/24) on Nickelodeon at 9:30 p.m.

POSTED IN television, Nickelodeon, The Thundermans