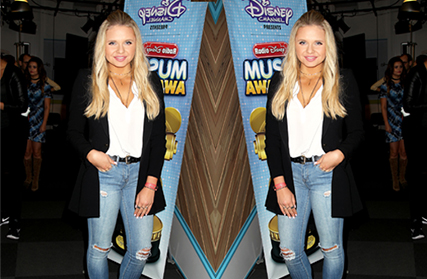 Radio Disney star and GL April/May featured artist Alli Simpson has been busy lately. Not only is she hosting her own talk show every Friday, she's also been hitting up the "On The Road To The RDMAs" tour, particularly the New York City concert at YouTube Space.

Alli's known for her keen sense of style and fash advice – keep an eye out for her styling vids from our GL music issue photoshoot going up later this week – so it's no surprise that her look was totally on point last Saturday. While promoting the RDMAs, premiering on Disney Channel Sunday, April 26th at 8 p.m., Alli looked super stylish in a pair of Dittos Selena mid-rise super skinny jeans.

If you've been coveting Alli's looks as much as we have (check out her spread in our music issue in stores now for more of her incredible style), then this is one giveaway you won't want to miss. Five lucky GL readers will win a pair of the same jeans Alli's wearing in sizes 26-30.

Are you digging Alli's look here? Press the "enter" button below to win a pair of these hip skinny jeans. Feel free to enter as many times as you want between now and when the contest closes on March 31, 2015 at 11:59 p.m. EST.